U.S. Rep. Mike Bost, R-Murphysboro, on Friday announced that he is running for re-election in Illinois’ 12th Congressional District. 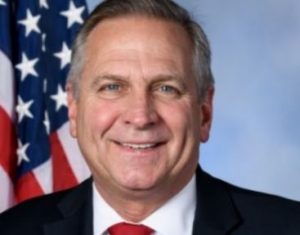 “With Joe Biden and Nancy Pelosi running roughshod in Washington, D.C., Southern Illinoisans need a battle-tested conservative fighting for them now more than ever,” he said.

Redistricting makes it likely that Bost will face fellow Rep. Mary Miller, R-Oak Park, in the GOP primary. Miller has not yet formally announced her intentions to run. Currently, she represents what is now the 15th Congressional District. She is a first-term incumbent, elected following the retirement of longtime Congressman John Shimkus, R-Collinsville.

Bost’s statement said: “Today, I’m proud to announce my candidacy for re-election in the 12th Congressional District. I have never wavered in defense of our constitutional conservative values; and I will always stand up for the hardworking families, veterans, farmers, and job creators of Southern Illinois who feel abandoned by the liberals in Washington.”

Bost has been in Congress since 2015.