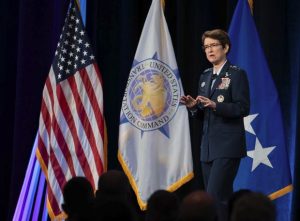 U.S. Secretary of Defense Lloyd J. Austin III presided over the ceremony. He said Lyons is a tough act to follow, but Van Ovost is exactly the right person for the job, describing her as a legend of a leader.

“She’s led at nearly every level of command, most recently at the helm of Air Mobility Command, where she played a key role by supplying planes and personnel for the Afghan airlift,” Austin said. “At the height of the NEO [Noncombatant Evacuation Operation], an aircraft was taking off from Kabul airport every 45 minutes. This kind of real-world combat achievement underscores something crucial. General Van Ovost, in the 21st century, careers like yours are a fighting imperative.”

In addition to recent operations in Afghanistan, Austin highlighted the strategic advantages USTRANSCOM provides to the nation and its ability to align mobility resources to the highest strategic priorities of the Department of Defense (DOD).

He said that on any given day, 115 railcars are moving DOD equipment, 33 ships are getting underway, 1,500 trucks are delivering cargo and every two minutes planes are hauling supplies, refueling aircraft, and moving patients.

Austin said those are just ordinary operations, but also that the past year for USTRANSCOM was anything but ordinary.

USTRANSCOM led the nation through the global pandemic with mitigation efforts, delivery of supplies and vaccines, and by sponsoring critical particle airflow and testing studies onboard commercial aircraft, which established industry-wide safety standards for passengers. Lyons was also directed to activate the Civil Reserve Air Fleet (CRAF) for just the third time and used CRAF for the first time to transport civilians.

Austin said USTRANSCOM soared over the normal high expectations for the command under Lyons’ leadership and forged “a global transportation network that is stronger and faster than ever, and even more secure, hardened, and sustainable.”

Lyons also advocated for partnerships with industry to develop an innovative space transportation prototype to deliver cargo to any place on the globe within an hour.

“When people ask me ‘How does TRANSCOM do it? What is the secret to success?’ I tell them the truth. We are blessed with incredible people from around the globe,” Lyons said. “To the men and women of TRANSCOM, it has been my greatest honor to serve as your 13th commander.”

Lyons said he knows the command will welcome Van Ovost with open arms and that she is eminently qualified to lead an enterprise of more than 116 thousand logistics and transportation professionals to meet a rapidly changing global security environment.

After taking command, Van Ovost said USTRANSCOM will remain committed to providing military leaders a mobility enterprise ready to deliver the immediate force tonight, and to be the decisive force when needed.

“I assure you USTRANSCOM will defend our nation through rapid power projection and sustainment, while continuing to build a unity of effort through the strong bonds of our industry partners and our allies and partners,” Van Ovost said. “We will also remain committed to our most critical asset – our people.”

Van Ovost expressed her appreciation for the leaders who chose her to serve and thanked Lyons for his leadership and service.

“We are all grateful to have been under your command and to have taken part in your legacy,” she said. “It is an honor of a lifetime to be selected to lead the United States Transportation Command as we prepare to meet the challenges of tomorrow, today. Together, we will deliver.”

USTRANSCOM exists as a warfighting combatant command to project and sustain military power at a time and place of the nation’s choosing. Powered by dedicated men and women, TRANSCOM underwrites the lethality of the Joint Force, advances American interests around the globe, and provides our nation’s leaders with strategic flexibility to select from multiple options, while creating multiple dilemmas for our adversaries.

Van Ovost thanked the NDTA and USTRANSCOM teams for orchestrating a “world-class logistics forum,” and said while new leadership brings a fresh perspective, “TRANSCOM’s mission is enduring and my number one priority remains the same – our warfighting readiness.”

“We do this through a warfighting framework of three elements – global posture, mobility capacity, and global command and control and integration,” Van Ovost said. “Since World War II, we have enjoyed strategic dominance in each of the three areas and we have presented our nation’s leaders with options.”

However, the general said the security environment is changing.

“We now face direct challenges across all domains, threatening our ability to deliver an immediate force tonight, and a decisive force when needed,” she said.

Discussing the enterprise’s footprint across the globe, Van Ovost said she was looking to attendees to innovate ways to prepare, package, and preposition materiel in order to improve deterrence and “progress to smaller force packages, operating from more austere places, and spanning greater distances.”

She said capacity across the air and sea was key. She committed to being “laser-focused on emphasizing a responsible ‘buy used’ strategy with the U.S. Navy,” in order to address the looming retirement of 34 of 50 vessels, and she also committed to “preserving necessary air mobility capabilities and capacity to ensure that we can deliver an immediate force tonight to meet our national security objectives.”

Finally, Van Ovost highlighted the need for resilient and agile command and control, calling it “one of my highest areas of interest and frankly, concern.” She stressed the need for cooperation and mitigation efforts.

“Our ever-growing number of cyber adversaries will be a challenge to all of us,” she said. “They have carefully studied our supply chain and transportation operations, and are actively working to disrupt and degrade logistics flows.”

Van Ovost also mentioned recent successes, such as use of the Civil Reserve Air Fleet during the historic non-combatant evacuation operations, analysis of tanker capacity, and working leading to an upcoming global household goods contract.

In closing, she referenced the meeting’s theme.

“Resilient and Reliable…Agile and Adaptable must be more than a bumper sticker,” Van Ovost said. “The future all-domain contested environment requires our logistics enterprise to be resilient and reliable. Our warfighting framework must be agile and adaptable to deter potential adversaries, and if necessary, win decisively.
“There is no second place when it comes to our national defense.” 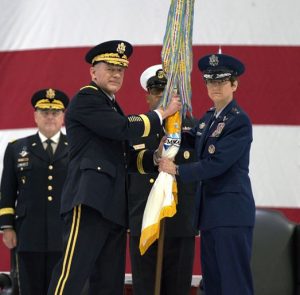