The City of O’Fallon has named Kirk Brueggeman as the new police chief and director of Public Safety.

In his role, he will be responsible for O’Fallon’s Public Safety Department, which includes O’Fallon Police, Fire, Emergency Medical Services and Metro East Communications.

“Kirk has served the City of O’Fallon with honor and professionalism for over 20 years,” said Mayor Herb Roach. “He is a proven leader, relationship builder, and visionary police officer. He will serve as the next police chief and director of Public Safety with excellence.”

Brueggeman will replace Police Chief Eric Van Hook, who announced his retirement from the city of O’Fallon, which he had served as a police officer since 1990. His last day will be Nov. 11. 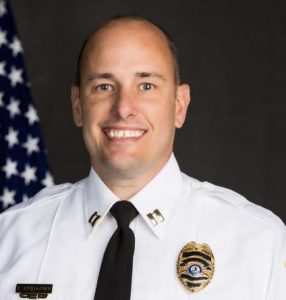 Brueggeman has been with the City of O’Fallon since 1999. Over the years, he has been promoted through the ranks of the O’Fallon Police Department and has served as Captain since 2016.

In a release, the city said Brueggeman has been instrumental in bringing the 10 shared principles to O’Fallon and has worked side-by-side with minority leaders to build strong relationships between the police department, city, and community.

Brueggeman has served as a supervisor for the Major Case Squad of Greater St. Louis, and instructor at Southern Illinois Law Enforcement Commission.  He is a member of the Southern Illinois, Illinois, and International Association of Chiefs of Police.

Brueggeman holds a master’s degree in Human Resource Management from Lindenwood University and a bachelor’s degree in Administration of Justice from Southern Illinois University Carbondale. Kirk is also a graduate of Northwestern University’s School of Police Staff and Command Class No. 460.

“I am looking forward to the challenge of serving as the next director of Public Safety for the City of O’Fallon,” said Brueggeman.  “We will continue to be the most complete and respected public safety department in the region. Safety will always be a top priority and I am honored to help continue the lasting reputation that O’Fallon has gained as a safe place to work, visit, or call home.”