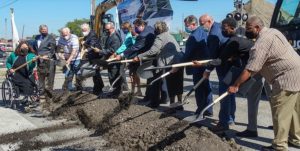 SPRINGFIELD – A railway improvement project intended to greatly improve traffic congestion between St. Louis and Chicago reached a milestone Tuesday as work began on a multimodal transportation hub in the capital city.

Gov. JB Pritzker was joined at a groundbreaking ceremony by U.S. Sens. Dick Durbin and Tammy Duckworth, along with several state lawmakers and local government officials, both Republicans and Democrats, to break ground on the Springfield Sangamon County Transportation Center, or what local officials have come to call “The Hub.”

“When this multimodal facility is completed, public mass transit will make the communities of Chatham and Sherman, Springfield, Rochester and Riverton as well as adjacent communities, more accessible to each other, and to St. Louis and Chicago and beyond,” Pritzker said during the ceremony.

Sangamon County Board Chairman Andy Van Meter said the $86 million Hub is just one part of a massive, $122 million project to upgrade the entire six-mile stretch of line that passes through the city that includes rerouting the line away from the city’s downtown.

For decades, the major rail line carrying both passenger and freight trains from St. Louis to Chicago has passed directly through the center of Springfield’s downtown.

As part of the state’s $45 billion capital improvements program passed in 2019, that traffic will be diverted several blocks to the east. That is just one part of a major upgrade to rail service along the entire St. Louis-to-Chicago line that is intended to improve the flow of traffic and ease rail congestion along the route.

Duckworth described it as a project that will have economic benefits for the entire state and the nation.

Durbin noted that the site of the new Hub, along what’s known as the 10th Street Corridor in Springfield, is near the historic Great Western depot where Abraham Lincoln gave his famous “Farewell Address” speech before boarding a train to Washington for his inauguration.

“So there’s a long connection in history between the place where we stand and the political past of America, and particularly with President Lincoln,” Durbin said. “But it’s more than that. These trains and railroads are an integral part of our economy.”

According to the project’s website, officials expect to complete design of the Hub by the end of this year. That will include determining what amenities and services will be located in and near the center. Construction is scheduled to be completed in 2025.