“Eric Van Hook directed O’Fallon’s Public Safety Department through some of its most important, and fastest growing years in history. O’Fallon is known as one of the safest communities in the area, and Eric has had an important role in that,” said Mayor Herb Roach. “He has served with professionalism, expertise, and bravery. We owe him a debt of gratitude. The entire community will miss his leadership.” 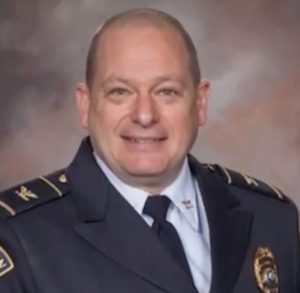 During his tenure as director, O’Fallon’s Public Safety Department has became a leader in the region, the city said in a release.  Van Hook (shown) has a long list of accomplishments through his career, including the growth of the O’Fallon Police Department to 50 sworn full-time police officers, establishment of the Metro East Communications Center (MECOMM), a joint 911 dispatch center in partnership with Fairview Heights, Creation of O’Fallon’s first diversity recruitment initiative, numerous officer well-being strategies, an officer body-worn camera program, and continuance of O’Fallon’s mission of building strong community partnerships and the pursuit of safety for all citizens.

Van Hook was named the 2019 Chief of the Year by the Illinois Association of Chiefs of Police.

“It has been one of the highest honors of my life to serve the City of O’Fallon. It’s a wonderful place to live, work, and serve,” said Van Hook. “I have been a police officer my entire adult life and while I will miss the job, I know that O’Fallon will continue to be a leader in the region.”