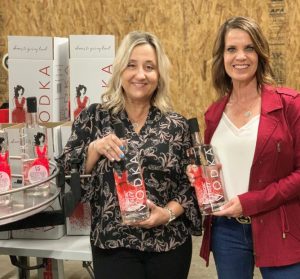 Denise Arendell and Christa Guilbeault were having dinner in March of last year when the friends’ conversation turned to business and charity.

What kind of operation, they wondered, would do well coming out of a pandemic? A business that would also serve the kinds of causes they’ve come to love?

“We thought it would be fun,” Arendell, of Edwardsville, said. “Women love vodka. Women love to support a cause.”

The fact that neither of them had ever been involved in such a business was not a deterrent. They woke up the next day and got busy.

Sixteen months later, their distilling distinction is getting noticed. Social Grace Vodka is popping up throughout Metro East. And it’s garnering conversation. 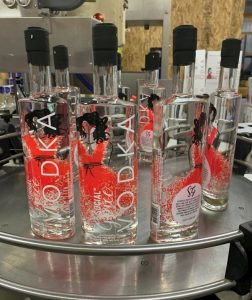 “It’s been a fun experience. We get positive feedback from everyone we talk to. Talking about vodka is a lot more interesting than talking about the weather,” Guilbeault, of Glen Carbon, said.

Central to the brand is the charitable reasoning behind Social Grace. The two women are active in several not-for-profit endeavors in the region. They have watched as the pandemic chipped away at fund-raising.

“Passion for giving back fueled this,” Arendell said. “March of 2020 changed things. Everything was shutting down — charitable golf outings, big galas. We knew how much suffering it would cause to all the nonprofits missing out on events.”

Nonprofits who feature Social Grace Vodka at their cash-bar fundraisers stand to benefit.

“From the very beginning, we decided that 10 percent of our profits would go back to nonprofits for women and children,” Arendell said. The exception to that will be for events at which their vodka is featured. They will immediately donate 10 percent to the event host to decide which charity will benefit.

Once the company gets to the point of profitability, the plan is to have a board of peers help vet nonprofits and decide who will be the beneficiaries of giving.

Their first event, on behalf of the Watershed Nature Center, will be held Oct. 7 at the Ink House in Edwardsville.

The vodka business might have begun with a fun conversation, but it’s become hard work.

“We certainly have learned a lot. We didn’t know this was on the horizon in our life, believe us,” Guilbeault said.

First, came research. One of the reasons the two chose vodka is they knew they’d be marketing to women. Vodka is appealing as it’s gluten-free and low in carbs and calories.

The women set out to find a contract distiller that would produce their formula and interviewed multiple distilleries before landing with a multi-generation family farm and distillery in Southern Illinois. Because the operation produces its own brand of vodka, the Social Grace operators agreed not to disclose the actual distiller.

The formula was derived based on multiple tastings tested by more than 200 people. They describe it as having “a hint of agave.” It is made with white corn and distilled six times during the process. It is also 80 proof, or 40 percent alcohol.

The bottles were made in Wisconsin.

Arendell came up with the name Social Grace. The choice was on a list that the two created and best suits their charitable intention, they said.

“Denise actually came up with it and when I saw it, it seemed extremely fitting,” her partner said.

Arendell, who is a financial advisor by trade, says vodka is her drink of choice, but Guilbeault, a former elementary schoolteacher in Bethalto, says she does not drink much alcohol at all.

They still remember going to the distiller to watch their first bottles filled on the line.

The most significant move to get the product in front of people was to find a distributor. Because Illinois is what’s known as a three-tier state, like most states, producers can only sell through a distributor.

The goal was to find someone who could sell their product for on-premise use, such as bars and restaurants, and off premise, like grocery stores.

“There aren’t a lot of female-owned brands in the United States,” Arendell said. “We had to present ourselves to distribution partners. When they looked at us and our demographics, which include women in an age bracket that we know appreciates philanthropy, it was a very easy sell.”

They landed partnership deals with Koerner Distributing in Illinois and with Nature Brands for distribution in Missouri.

Once they build their base locally, they are considering Florida as their next location.

“Having a presence in grocery stores has really helped,” Arendell said. “Fortunately, the Schnucks in Edwardsville, the first week they had us, they had us on an end cap.”

Guilbeault added: “Denise and I are very specific in the way the cartons look. They are very beautiful. We did that with intention so they could be used as a display in a very beautiful way, to capture people’s attention.”

The pair managed to pull off a sports feat, of sorts, as well. Social Grace Vodka was featured as the premium drink for broadcaster Mike Shannon’s birthday celebration in Edwardsville in July.

“Their mixologist came up with a drink called the Ladybird,” Arendell said.

The product has made its way to Dierbergs, and Edwardsville area restaurants and establishments like the Wang Gang, Exo Lounge and Nail Bar, and Mousalli’s Prime, with deals pending on several others.

More information can be found under the Social Grace Spirits page on Facebook.

Editor’s note: This story appears in the September issue of the Illinois Business Journal. For more stories, go to the Current Edition link at ibjonline.com