Southern Illinois University Edwardsville alumnus Zach Wygal is a teacher on a mission to help end the  issue of lunch shaming.

Many U.S. schools are affected by lunch shaming, a term used to describe situations in which students are publicly singled out and stigmatized during lunch. To pressure parents into paying delinquent bills, schools sometimes give students a cold sandwich instead of a hot meal and sometimes deny food all together.

To help combat this issue nationwide, Wygal, an 8th grade teacher at Hillsboro Junior High School, has created endlunchshaming.com, an initiative that details the reality of lunch shaming while calling for change.

“Lunch shaming takes place when students are provided an alternative meal, branded with stickers or stamps, or have lunch withheld in an effort to get their parents to pay a debt,” explained Wygal. “This project was created to help raise awareness and allow website visitors to contact legislators that are directly involved with current bills combating lunch shaming.”

Wygal earned a bachelor’s of special education in 2012 and a master’s in diversity and equity in education in 2019 from the School of Education, Health and Human Behavior. While originally pursuing a master’s in curriculum and instruction, Wygal was introduced to lunch shaming while taking a class detailing poverty in schools. 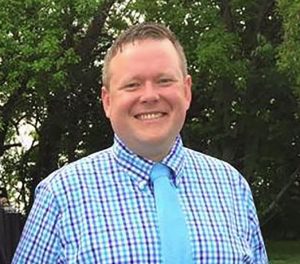 “At this time, my school would give students a cheese sandwich if they had a balance over $25,” said Wygal. “I thought back to when I was younger and realized that low-income students had different colored lunch tickets. While working in a low-income area, I became interested in how poverty impacts students. I was unable to find research on how students felt about lunch shaming and decided to switch my master’s focus to diversity and equity in education.”

Wygal’s new major allowed him to conduct research and interview students who had been impacted by lunch shaming. His final capstone project, entitled “Feelings and Perceptions of Students that were Lunch Shamed,” laid the groundwork for endlunchshaming.com.

Website visitors can learn more about lunch shaming, read stories of those impacted, and take action by reaching out to their state representatives. Currently, there are two bills sitting in Congress, both titled “The Anti-Lunch Shaming Act of 2019.”

“Visitors can easily find their legislator and click on their link,” said Wygal. “There’s even a letter available for users to copy and paste. The entire process only takes a couple of minutes.”

“The more people talk about lunch shaming, the better chance we can end it for good,” added Wygal. “Students are often the ones caught in the middle of what should be something between parents and schools. These kids can’t get a job to pay for their lunches. They just want to show up to school to learn, eat, and be treated like anyone else.”