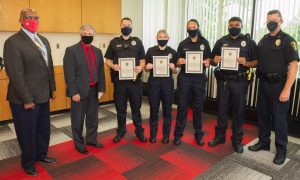 To continue to provide a safe and secure campus environment, the Southern Illinois University Edwardsville Police Department has added four officers to its squad. The new members of the force bring prior experience as police officers and 911 dispatchers from the Metro East area.

The officers were sworn in Friday, Aug. 20 by SIUE Chief of Police Kevin Schmoll. Chancellor Randy Pembrook and Vice Chancellor for Administration Morris Taylor also participated in the ceremony.

The new officers are:

• Nicholas Pruitt earned a bachelor’s in criminal justice in 2014 from Greenville University, where he began his career as a police officer in 2020. A native of Breese, Pruitt previously served as a 911 dispatcher with the Clinton County Sheriff’s Department for more than seven years.

• Jeremy Spiller earned a bachelor’s in criminal justice from SIUE in 2016. Spiller’s father was a former SIUE police officer in the early 1990’s, and his mother is a recent SIUE retiree.

Previously, he served four years as a deputy at the Madison County Sheriff’s Department.
Bramblett and Kalous are currently attending Southwestern Illinois College’s Police Academy and will graduate December 3. Meanwhile, Spiller and Pruitt are completing the Field Training Program at SIUE.