A long-planned business district at the site of the Foucek nursery property in Glen Carbon, targeted for a possible Menards store and other development, was given the go-ahead Tuesday.

The Orchard Town Center Business District became reality with a series of votes by the Village Board.

Four ordinances were passed. One approves the TIF Redevelopment Plan and Project, one designates Orchard Park a TIF project area, one approves TIF financing and one establishes the business district, approving the plan, giving permission to impose and collect sales tax and approving certain actions in connection with establishing the district.

This will allow the village to enter into a TIF Redevelopment Agreement with the developer.

If they fail to reach an appropriate agreement the village can simply dissolve the TIF and Business District programs at a future board meeting.

The village does not own the property that will be developed and is not a party to the private contract between the developer and the owner. The land is situated along Governors’ Parkway, between Plum Street and Troy Road, just south of the Dierberg’s complex, which is inside the boundaries of neighboring Edwardsville.

Menards plans to build a 290,000-square-foot store that will anchor the center. There will be 12 outparcel locations for building smaller individual businesses and restaurants. South of Menards would be a small retail development. All will be on a wedge-shaped piece of property south of Governors Parkway.

“We think the project is really a complement to the area,” said Tim Lowe, senior vice president of development for Staenberg Group, developer for the project said at a board meeting in June. “It doesn’t necessarily draw away or take away from what exists today. It brings in new uses that aren’t in this market that are looking to get involved but can’t find a location.”

He added: “We’ve got a really good list of outparcel tenants looking to locate at this property.”

Some information is from Charlie Feldman, of the Time Tribune News. 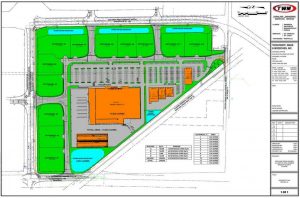