The vaccine requirement, which goes into effect Sept. 5, will apply to “all P-12 teachers and staff, all higher education personnel, all higher education students, and health care workers in a variety of settings, such as hospitals, nursing homes, urgent care facilities and physician’s offices,” Pritzker said at a news conference in Chicago.

“Effective Sept. 5, individuals working in these settings who are unable or unwilling to receive their first dose of vaccine will be required to get tested for COVID-19 at least once a week, and IDPH and (the Illinois State Board of Education) may require more frequent testing in certain situations, like in an outbreak,” he said.

Illinois Department of Public Health Director Dr. Ngozi Ezike said the state is seeing 220 hospital admissions per day, a number on par with a surge in May. Pritzker said 98 percent of cases, 96 percent of hospitalizations and 95 percent of deaths since January have been among unvaccinated people.

While vaccines are the best defense, Ezike said, “wearing a mask continues to be one of the simplest, cheapest ways to reduce the spread of COVID-19.” 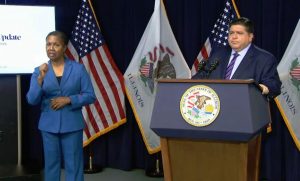 Intensive care bed availability in southern Illinois is at 3 percent, he said.

“That’s because the regions with the lowest vaccination rates are the regions where there are fewer hospitals, and lower hospital capacity,” Pritzker said. “And those hospitals are sometimes the least well equipped to handle cases as they become more acute.”

He added, “We are continuing to rely on experts at the (U.S. Centers for Disease Control and Prevention) and (Illinois Department of Public Health), but you don’t need to be an epidemiologist to understand what’s going on here. This is a pandemic of the unvaccinated.”

The current vaccination rates – nearly 53 percent of the state’s population is vaccinated – “are not enough to blunt the ferocity of the delta variant,” which has led to hospitals “again fighting the battle that we had hoped would be behind us by now.”

Republicans, meanwhile, continue to call on the governor to further involve the General Assembly in his COVID-19 response.

House Republican Leader Jim Durkin, of Western Springs, shared a letter he sent to Pritzker on Monday, noting he got a call from the governor Wednesday night seeking input on a potential response amid the new COVID-19 wave.

But, according to the letter which his office shared with members of the media, Durkin said he received a breaking news brief shortly after the phone call which outlined Pritzker’s planned announcement for the Thursday news conference.

“I will reiterate my plea on our call yesterday to please make your experts available to the General Assembly so that we can examine their data and plans, review the results of your many previous mandates and together plot a course of action that will work,” Durkin said in the letter. “You have the authority to call for a special session of both chambers to address this very critical issue, and I am imploring you to do so immediately.”

Pritzker said he’s “always been available” to GOP leadership and rank-and-file members, and “when the legislature talks to me, I listen.”