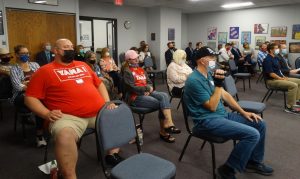 Dozens of people crowd into the Illinois State Board of Education meeting Wednesday in Springfield to protest a universal mask mandate now in place for all public and nonpublic schools in the state.(Capitol News Illinois photo by Peter Hancock)

A capacity crowd packed into the Illinois State Board of Education room on Wednesday as many more stood outside the building to protest the state’s new indoor mask mandate in all public and nonpublic schools.

“I’m so tired of hearing how resilient our kids are. Resilience is something you choose,” said Ruby Johnson, a mother of seven children from New Lenox. “Our kids did not choose to be masked all day, unable to see their friends or teachers smile at them, to have to COVID test to stay in school, to be burdened with the idea that they carry an invisible disease that they could make their friends sick with.”

Gov. JB Pritzker issued the mask mandate in an executive order Aug. 4, shortly after the U.S Centers for Disease Control and Prevention issued updated guidelines for schools in response to a surge in the highly contagious delta variant of COVID-19. Those guidelines urge “universal indoor masking” by all students over the age of 2, staff, teachers, and visitors to K-12 schools, regardless of vaccination status.

Since then, ISBE has put more than two dozen public and nonpublic school systems on probationary status for refusing to comply with the mandate, although some have since had their status restored after later agreeing to comply.

Under the state’s administrative code, schools can be placed on probation for “deficiencies that present a health hazard or a danger to students or staff.” When that happens, the schools are given 60 days to submit a plan for correcting the deficiency and, if they fail to do so, risk losing their state recognition altogether.

“I’m taking this requirement extremely seriously because every single student in Illinois deserves a safe in-person education this fall,” State Superintendent Carmen Ayala said at the start of Wednesday’s meeting. “I know this is a difficult time to be a leader, and I deeply appreciate the cooperation and the leadership of all the superintendents and principals across our state.”

But a number of local and regional superintendents argued that the decision about how to reopen safely should be left to local leaders, just as it was during the early phases of the pandemic.

“For decades now in Springfield, our school leadership across the state has fought one battle after another over state mandates,” said Kyle Thompson, the regional superintendent for Region 11 in east-central Illinois. “Our politicians at the state capitol are often well intentioned when they add to our daily demands over the curriculum we provide, the meals we serve, our dress codes and much more. However, too often they don’t realize the costs that come from these more isolated decisions. Under COVID-19, mandates have become politically polarizing and our students are suffering as a result of it.”

Shane Gordon, superintendent of Bluford USD 318 in southern Illinois, said the polarizing atmosphere surrounding mask mandates has been a challenge for all school officials in Illinois, and he said ISBE’s strict enforcement of the mandate was adding to the challenge.

“My district did choose to follow the mandate, by a 4-3 vote,” he said. “Quite honestly, this decision was one made out of fear of this organization and the consequences associated. I’m before you today to express that fear is no way to govern, and fear is no way to lead.”

Since that vote, Gordon said, he and members of the Bluford school board have been targets of harsh criticism in the community.

“I wish to express the current situation created by Springfield is untenable in many school districts across the state,” he said. “Good people are leaving as a result of this.”

But not all superintendents who spoke Wednesday opposed the mask mandate or ISBE’s enforcement of it.

Sheri Smith, superintendent of the Forrestville Valley School District in northwest Illinois, argued that putting districts on probation might be too lenient because it actually gives districts additional time to continue defying the executive order.

“Why do I care about other school districts? Generally speaking, I don’t have time to do that,” Smith said. “However, without immediate consequence and accountability, superintendents and local school boards are left to once again navigate impossible scenarios. Probationary status does not limit a school’s ability to participate in (interscholastic) events. That means locally we’re left to determine if our students are placed in undue risk by participating with noncompliant districts.”

Those statements came during the public comment portion of the board’s meeting. The board took no further action on the mask mandate, and Ayala gave no indication that she intends to ease up on the enforcement of it.