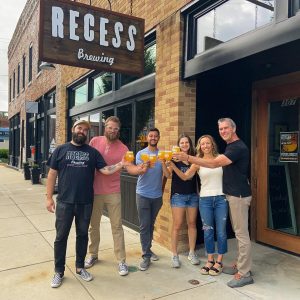 Jay Beard, a businessman who has invested heavily in Downtown Edwardsville in recent years, has expanded his holdings with the purchase of Recess Brewing, 307 N. Main St.

“It’s been in the works for quite a while,” Beard told the IBJ.

Beard said he and his wife have been fans of the brewery only more recently, but they often stop at similar places while traveling. Flach, who launched the business in 2014 after moving to the area from Chicago, found himself having to run things from a distance when, a short time after launching the operation, he was transferred with his job to South Carolina. Ever since, he has heavily relied on his staff for the operations.

The Recess team includes head brewer Tracy Hutton, who has been running things in recent years; as well as taproom manager/event planner Brandi Bywater, and Cody Savoie, the overall manager and marketer.

The operation is also getting the expertise of an “Advanced Cicerone” — Edwardsville native Adam Ottwein. The Cicerone term is a trademarked certification and Ottwein is one of fewer than 200 in the world to hold it.

“An Advanced Cicerone has a distinctive expertise in all things beer related. Adam and Tracy will be working together over the next few months to brew beer we all can be proud of. We are excited to see old and new faces joining us at Recess,” Beard said.

There are also ideas to expand the brewery, either where it is now or at a new location, but Beard said those are still being explored. Now, the location houses a 1,500-square-foot brewery and a 1,100-square-foot taproom. Recess produces about 250-300 barrels of beer a year and has about eight to 14 beers in its rotation at any time, he said.

With Flach operating from a distance, the brewery did not have the chance to live up to its potential, Beard said.

“My wife Julie and I hadn’t been to Recess in a few years because at the time we were not all that impressed by the beer but loved the atmosphere and being downtown. When Covid hit we wanted to support local businesses. We walked up to the window at Recess and bought a four-pack of Yellow Hammer. We were super impressed and quickly returned to buy more.”

Beard said he reached out to Flach on a purchase agreement.

“Julie and I are very passionate about local brands and their success for our community. We would be kidding ourselves if we thought we could do that ourselves, so we have been lucky enough to put together a young team of beer fanatics to take Recess to the level Edwardsville deserves. Not only will they be working with us, but they will eventually be the majority owners of the company.”

He added: “We have been very lucky over the years so this is one way we can help the next generation of young people make a difference in Edwardsville.”

Beard owns several other local businesses, among them The Lodge, a coworking space on North Main Street, Goshen Coffee Co., and Carrington Homes. He also has several lots that he sells to developers.

Recess is aptly named because of its proximity to the Madison County Courthouse. Downtown in general attracts a number of patrons because of its business and entertainment venues.

“There are so many fun and exciting changes in the works,” Beard said. “Please stop in, grab a beer and stay a while.”