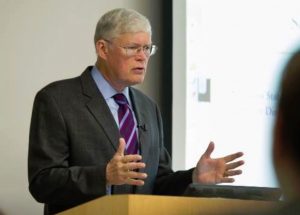 William Haine, a towering figure in local politics, who rose from war hero to Madison County Board member to state’s attorney to state senator, has died.

The Alton native had just celebrated his 77th birthday on Aug. 8. He had been in ill health in recent years.

His family released this statement Monday:

“Strengthened by the sacraments of the Catholic Church and with his beloved wife of 50 years Anna by his side, retired Senator William R. Haine passed away early in the morning on August 16 after the Solemnity of the Assumption of Our Blessed Virgin Mary into Heaven. In this time of great sorrow, we feel great joy in knowing that Bill, our beloved husband, father, grandfather, and great-grandfather, died peacefully. He was to the end a man of deep and committed Faith in Jesus Christ, surrounded by the songs and prayers of his family, to whom he had offered every ounce of his care and devotion. Though we have every hope that Bill has now joined all the angels and saints in the Kingdom of God for eternity, please continue to pray for his eternal salvation and the comfort of his family, who will miss him greatly.”

An obituary was being prepared, the family said. He and his wife Anna had only recently celebrated their 50th wedding anniversary.

Haine was an old-school Democrat, the type who could talk to anyone about anything — and worked across the aisle to get things accomplished.

“I was saddened to learn of the passing of Mr. Haine,” said Madison County Democratic Party Chair Randy Harris. “Bill was a tireless advocate for working families and the entire Metro East. Bill had a passion for helping and making a
difference in people’s every day lives. His dedication to both his faith and family was to be admired and celebrated. Bill was a true warrior and champion for our Region, and we will all sorely miss him. On behalf of the Madison County Democratic Party, we offer our condolences to his family, friends, and all those who knew and loved him.”

Though his legislative accomplishments were many, it was his amazing family that gave him the most pride. In a 2018 interview with the IBJ, he spoke at length about his seven children and his grandchildren, which numbered 33 at the time.

According to public biographies, Haine was first encouraged to take up a career in politics by an Ursuline nun at St. Patrick’s Grade School in Alton. After graduating from Marquette Catholic High School in 1963, he earned his B.A. from Saint Louis University in History in 1967. In both high school and college, he became involved in local and state politics, including the races of Alton Mayor Clyde H. Wiseman, state Sen. Paul Simon and U.S. Sen. Paul H. Douglas.

After college, Haine enlisted in the U.S. Army to serve in Vietnam. He was awarded the Bronze Star for Meritorious Service in combat operations after his tour as an enlisted army soldier in the First Cavalry Division (Air Mobile) from 1968 to 1969.

While still in Vietnam, he filed as a candidate for alderman of the city of Alton, losing by only a narrow vote despite being unable to campaign.

He earned his law degree at St. Louis U in 1974 and went on to partnership in a Wood River law firm with Randy Bono, who later became a judge.

Haine was elected to the Madison County Board in 1978 and first ran for election as state’s attorney in 1980, but lost. He ran again for the office and won, holding it from 1988 to 2002, when he was appointed to fill the seat of of retiring state Sen. Evelyn Bowles. Haine held the senate seat through several more elections before retiring in January 2019.

He previously told the IBJ that his work in the legislature to get flood-protection certification for the local levees was one of his great accomplishments. He took pride, too, in his early days in county government, when he helped create and then chaired the Madison County Transit District.

“I am saddened to learn of the passing of a true giant from the Metro East, former State Senator Bill Haine. I had the good fortune to replace Bill in the State Senate in 2019 when he retired. But, I have known him for many years as our professional relationship and friendship began in the Madison County state’s attorney’s office.

“Bill was a dedicated and committed public servant and an even better person. As a U.S. Army veteran and elected official, Bill was a true leader for our region and worked to ensure quality educational opportunities for students across the state. His legacy and accomplishments, as well as many people’s fond memories of his unwavering strength and courage, will last for many years to come.

“Bill, thank you for everything you have done for the 56th Senate District, the Metro East and the state of Illinois. My condolences to his wife, Anna and family, as he will surely be missed.”

“I had the honor of serving with Bill Haine in the Illinois Senate and working closely with him on the Senate’s Judiciary and Criminal Law Committees where we developed a friendship I have valued throughout my career. He was more than a colleague, he was a mentor and a teacher. Like many of my colleagues, I was not only impressed by ‘Professor’ Haine’s grasp of the law, but his knowledge of the history behind it, as well as history at large. I am a better lawyer and public servant as a result of my time with Bill Haine.

“Bill was a true statesman who was able to disagree without being disagreeable and for whom ‘bipartisanship’ was more than a talking point. He worked across the aisle and across county lines to improve the quality of life for residents of every region of our state.

“Those of us fortunate to know Bill knew that only his deep love of his large family came before his commitment to service. On behalf of the people of Illinois, thank you for sharing your husband, father and grandfather for so many years. We are all better because of his kindness, integrity and leadership. The state of Illinois mourns your loss and celebrates the life of our great friend and colleague.”