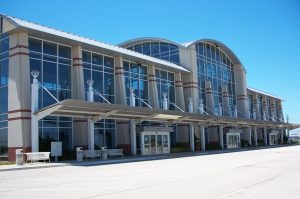 Supporters of MidAmerica St. Louis Airport in Mascoutah say commercial service airports in Illinois will benefit from a new state law designed to speed up receipt of federal money.

The bill amends the Illinois Aeronautics Act, targeting a subsection of the Act known as the Channeling Act. The amendment eliminates a requirement that federal funding for commercial airports with 10,000 annual enplanements (with the exception of O’Hare and Midway International Airports in Chicago) must go to the Illinois Department of Transportation’s aeronautics division to be distributed to the airports across the state.

The new law enables the commercial airports to directly receive and spend the federal money awarded to them by the FAA. The law’s aim is to dramatically streamline the process, potentially delivering benefits for the airports and their surrounding communities.

“As we continue to grow, this amendment will enable us accelerate future projects, put local contractors to work faster, and provide an even better travel experience for passengers traveling through MidAmerica Airport,” said Mark Kern, chairman of St. Clair County, which is home to MidAmerica Airport. “It’s great news for Illinois Airports, and we applaud our state legislators for their unanimous support that helped to secure passage of SB-1232.

“The SB-1232 legislation will significantly reduce the time it takes for FAA grant monies to be applied to airport projects and subsequent reimbursement of those funds to the airport sponsors,” said Bryan Johnson, director of MidAmerica St. Louis Airport. “Essentially, SB-1232 cuts out the unnecessary middleman – in this case the State of Illinois – and will save time and untold dollars for MidAmerica and the many other commercial service airports in the state.”

The law goes into effect on Jan. 1, 2022. IDOT will no longer have to approve all planning, construction, development and improvements for vertical facilities such as terminal buildings and hangars at the impacted airports, allowing the individual airports to manage those steps in the funding process themselves and eliminating significant delays that occurred under the existing Act. According to the Illinois Airports Council, those delays became abundantly clear during the height of the COVID-19 pandemic, as the CARES Act designated millions of emergency funding to airports. While neighboring states received their funds in just a matter of days, Illinois airports waited nearly six months. The council notes the delay was a direct result of the Channeling Act’s language.

With more than 340,000 travelers projected to fly through MidAmerica in 2021, the airport is already in the midst of an expansion that will double its size by 2023. Roughly $13 million in federal funding is supporting that project, and while it won’t be impacted by the new law as the project originated prior to its passage, all future Airport Improvement Program (AIP) projects beginning in FY2022 will benefit from this change. Among the upcoming AIP projects that could benefit are runway and taxiway improvements, roadway widening/rehabilitation, tree obstruction removal and new snow removal equipment and associated building, to name just a few.