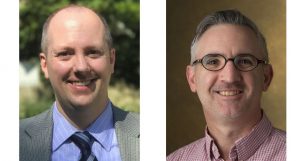 The public is invited to a panel discussion on the “History of Changing Voting Rights in America” on Wednesday, Aug. 11, at 1 p.m. in the County Board Room in the Madison County Administration Building. The moderators, SIUE professors Erik Alexander and Bryan Jack, will lead a lively discussion on voting rights using specific examples in American history.

Democracy in America is based on the radical idea that power and decision-making are shared among the citizens of a nation. The problem, however, is that the framers of the U.S. Constitution did not define who was a citizen, who could vote, or how they could exercise the right to vote. Historically, we have answered these questions in different ways over the course of many years. As a result, voter participation has expanded and contracted in different places in the U.S. at different times. For example, women were not given the right to vote in federal elections until 1920, although, here in Illinois, they were allowed to vote in select local elections more than a quarter of a century earlier on what were known as “little ballots.”

Bryan Jack (right) is an associate professor whose areas of specialization are African American history, St. Louis history and the American South. He has developed numerous SIUE courses on African American history. Erik B. Alexander (left), also an associate professor, specializes in 19th-centry United States history. He is research currently focuses broadly on political parties and political developments with a special interest in the intersection between social and political change, the coming of the Civil War and Reconstruction.

This program is hosted by the Madison County Historical Society and Madison County government who, with Illinois Humanities, brought the latest Smithsonian Museum on Main Street Exhibition to Madison County. Voices and Votes: A History of Democracy in America, will remain on display in the Madison County Administration Building lobby through August 20 from 9 to 4 Monday through Friday. If additional information is needed regarding either the exhibition or the program, contact staff at the Madison County Archival Library at (618) 656-7569.