In a three-minute kickoff video ending with the tagline “strong leadership in tough times,” the governor emphasized his response to the COVID-19 pandemic and contrasted himself to former U.S. President Donald Trump, with whom Pritzker frequently sparred during the height of the pandemic.

“When I ran for governor four years ago, I could not have imagined that I would end up leading the state through a global pandemic,” Pritzker said in the ad. “Look, I may not have gotten every decision right. But at every step along the way I followed the science and focused on protecting the lives and livelihoods of the people of Illinois.”

Another one-minute video posted to the Pritzker campaign’s YouTube channel features Stratton, the state’s first Black lieutenant governor, touting the “history” of the pair’s 2020 election to the state’s executive office.

“Over these last three years we’ve made massive strides to move Illinois in the right direction, but we know there’s still a lot of work ahead of us,” Stratton said in the ad. “We’ve got to help families get through the other side of the pandemic. We’ve got to continue tackling the systemic inequalities and barriers to justice that have been present for far too long, we’ve got to build on what we’ve started, keep putting Illinois on the right track and continue moving forward together.”

The announcement comes as the state is in the middle of a broader reopening period after more than a year of economic restrictions levied by Pritzker, largely through executive order, in response to the pandemic that has killed more than 23,000 Illinoisans.

But it also comes as the state and nation are seeing a resurgence of the virus as vaccination rates stagnate and a new more contagious variant spreads.

As the numbers rise, Pritzker’s office said Friday the governor currently has “no plan to implement any additional mitigations now that there is an abundance of vaccine available and accessible across Illinois. We encourage all Illinoisans ages 12-plus to get vaccinated as soon as possible.”

But Pritzker, speaking at a news conference regarding infrastructure later Friday, said his administration is “always open to making changes in policy in order to keep people safe and healthy.”

“Obviously, we’ve got rising rates of infection in certain parts of the state, and decisions will be made, if those areas continue to have rising infection rates, about whether or not we need to impose some different standard for those areas,” he said, speaking of counties on the border of Missouri, which has one of the worst infection rates in the nation.

Pritzker spent $171 million of his multi-billion dollar personal fortune during his successful election to unseat Republican Gov. Bruce Rauner in 2018. In recent weeks, the governor has been bankrolling “Blue Wave Illinois” ads on social media, emphasizing Illinois Democrats’ accomplishments such as a minimum wage increase passed in 2019 and Republicans’ unanimous opposition to the measure.

He will join a 2022 field that includes three announced Republican candidates and a number of other intriguing potential candidates.

That includes Darren Bailey, a state senator from Xenia who was an outspoken critic of the governor’s pandemic response, challenging Pritzker’s executive orders in court in a high profile case that was eventually tossed by a judge.

Paul Schimpf, an ex-state senator and former unsuccessful GOP candidate for attorney general in 2014, has also been campaigning across the state.

Gary Rabine, a Schaumburg businessman who founded the Rabine Group, an exterior services company, is also seeking the Republican nomination. 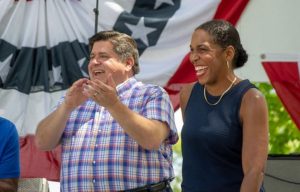 Gov. JB Pritzker and Lt. Gov. Juliana Stratton, pictured here in a file photo from the Illinois State Fair in 2019, announced Monday they would run for reelection in 2022. (Capitol News Illinois file photo by Jerry Nowicki)