Despite low interest rates and a U.S. real estate boom, Illinois is constructing homes at one of the slowest rates in the nation, a research group says.

A new report from the nonpartisan Illinois Policy Institute finds Illinois ranks 48th in the nation for home construction by population. Illinois only built 102,010 new single-family homes from 2010-2020, according to U.S. Census Bureau data.

The only states to have constructed fewer homes relative to their population since the Great Recession were Connecticut and New York. In comparison, the states building the most new homes per capita are Idaho, South Carolina, Delaware, Utah, North Dakota, North Carolina and Texas.

One major reason why building homes in Illinois hasn’t made sense for an increasing number of families is the state has the second-highest property taxes in the nation, which contribute to higher housing costs, Institute experts say. 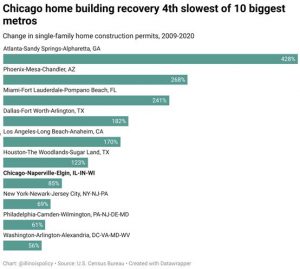 How home building has fared in Chicago and Illinois:

•             The states that have seen the largest spike in new home construction during the decade are Florida, Colorado, Utah, Idaho and Arizona.

•             Property taxes are so high in Illinois that they are the equivalent of nearly seven monthly mortgage payments each year for new homeowners.

“Many families are finding high taxes make purchasing or building a new home unaffordable. The lack of new home construction contributes to a lack of supply in housing inventory, driving up prices. This, coupled with a decline in the value of services residents receive for property taxes, is likely a significant reason why new home investment in Illinois may not be as worthwhile when compared to other states.

“The best way to reverse the trend of higher taxes for fewer services is through a constitutional amendment that will shore up state and local government finances, protect core services and reduce housing costs for Illinois homeowners.”