Roughly half of all state House races were uncontested under most recent political maps, according to an Illinois Policy Institute analysis, meaning some 4.7 million voting-age residents had no choice in their state representative in an average election year.

And, as the debate heats up nationally over election laws and voter suppression, the new research shows Illinois’ gerrymandered maps have contributed to reduced voter participation.

Illinois Policy Institute analysis finds voter participation was on average 7 percentage points lower in Illinois legislative House districts that only had one candidate on the ballot.

Citing Illinois State Board of Elections data, the institute found there could have been 1.7 million more votes cast for state representatives if every state House race had been competitive during the most recent legislative maps – which were signed into law in 2011.

In order to encourage voter participation, the Institute is encouraging enacting of legislation that would allow for independently drawn maps and encouraging more candidates to run for office, particularly in areas that have historically faced uncontested elections. 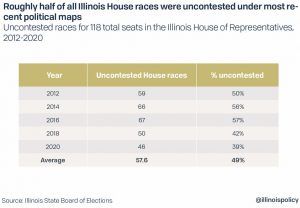 Highlights of the report show:

•             In the 2020 election cycle, 39 percent of Illinois House of Representatives races and 45 percent of Illinois state Senate races had just one candidate. Altogether, nearly 3.9 million voting age adults and nearly 5 million Illinoisans total – about the size of Cook County – lived in districts where there was only one option for a state representative on the ballot in 2020.

“Voters deserve choices on their ballots, especially in Statehouse races, which affect so much of their everyday lives. Illinois’ current system draws districts to favor one political party or another, which leads to a lack of challengers.

“Research shows more competitive elections are linked to less corruption. Our state risks another lost decade of unfair elections, unaccountable lawmakers and rampant corruption after Gov. JB Pritzker broke his promise by signing gerrymandered maps. Given a lack of independently drawn maps, it is time to educate interested citizens on how to counteract the voter suppression caused by rigged maps by running for office themselves.”

“We see that voter participation is higher when there are clearly differentiated options on a ballot. High voter engagement is often viewed as a sign of a healthy democracy. Conversely, a lack of choices on the ballot can result in fewer voters exercising their basic rights. This, in turn, tends to skew policy in favor of special interest groups over everyday voters.

“Fixing this problem should be a nonpartisan priority as Illinois rolls out its next legislative districts.”