Darin Redden, who served a long career as a police officer in Wood River, has been honored in his latest post.

Chattanooga, Tenn.-based Walden Security announced Redden as the company’s 2020 Court Security Officer of the Year for the 8th Circuit of the United States Marshals Service at a local ceremony in his honor. 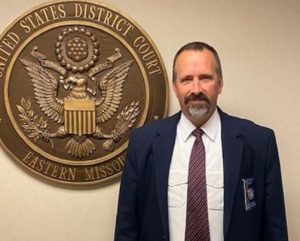 The annual award is presented to employees throughout the country for the critical safety and customer service role Walden Security officers have for the company’s clients.

Only 13 security officers from the company’s more than 6,000 employee workforce receive this top award each year. To qualify, a prerequisite is having Court Security Officer of the Quarter recognition within the same year.

Redden (shown) served 25 years in the narcotics and detective division at the Wood River Police Department, where he earned the rank of sergeant. That experience, along with work on the Major Case Squad of Greater St. Louis gained him expertise he applies to his current role.

His award nomination specifically cited the de-escalation of a potentially dangerous situation involving an agitated subject to protect those around them.

Each Court Security Officer of the Year is presented with a $500 cash award, commemorative name tag and Coin of Excellence during an awards ceremony attended by clients, co-workers, family members and Walden Security branch and corporate support staff.

“The Court Security Officer of the Year is the most prestigious recognition given to those officers who have excelled in their duties by demonstrating initiative, leadership and outstanding service. They are an example to us all.” Walden Security President Michael S. Walden said.

Walden Security is one of the nation’s only security firms with an ISO 9001:2015 Quality Management System Certification and is the nation’s largest WBENC-certified Women’s Business Enterprise specializing in uniformed and integrated security services.

For four consecutive years, Walden Security was ranked among the Training Top 100 award for its extensive training programs, and received various awards from Training magazine for its classroom-delivered employee training and orientation program as well as its advancement training program for managers. Dedicated to business integrity, Walden Security is also a two-time winner of the Better Business Bureau Torch Award for Marketplace Ethics and recipient of the BBB International Torch Award for Ethics.