A group of businesses and labor organizations is pushing back against an elusive energy policy change being crafted behind closed doors they say will reverse Illinois’ energy competitiveness and increase costs by at least $700 million a year.

For months, closed-door negotiations among lawmakers and the governor’s office have touched on having 100 percent clean energy by 2050 by closing coal-fired power plants by 2035.

“The state’s low-cost energy prices and reliable electric grid have been cited by governors time and again as reasons why businesses should stay in or relocate to Illinois,” the group said in a statement Thursday. “Now, Illinois is poised to eliminate this economic development incentive at a time when businesses need help to recover and rebuild from the upheaval caused by the pandemic.”

Details in bill form of the governor’s proposal are still scant, but Rick Terven with the Illinois Pipe Trades Association said what he’s heard from negotiators is driving fear among his members

“How are we going to survive this when some of these sources of employment for many decades, generations, are at risk of closure as soon as five to ten, 15 years,” Terven said.

The measure could also subsidize nuclear power plants to the tune of $700 million, with even more revenue increases going to fund clean energy production.

The latest proposal the coalition is privy to would shift increased costs from residential consumers to commercial and industrial consumers.

Jacob Margulies, with Continental Envelope in Geneva, said that will increase energy costs by $100,000 a year.

“That is something that we cannot afford coming out of a pandemic,” Margulies said. “It would result in increased costs and decrease our ability to be competitive with other envelope companies in neighboring states.” 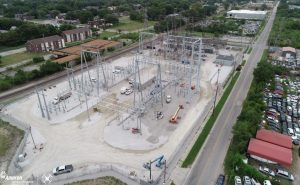 Jeff Adkisson, with the Grain and Feed Association of Illinois, said the move will also hit farmers.

“The increased cost for power to agricultural businesses like those run by our members would be passed on in the form of lower prices to farmers for commodities and higher prices for animal food,” Adkisson said.

“These are people’s pocketbooks we’re talking about,” Karr said. “They’re investments they’ve made. Jobs from our labor friends that are at risk. These are things that need to be understood and clearly vetted and they’re not being so.”

The governor’s office didn’t respond to a request for comment.

PHOTO: Ameren Illinois last year completed construction of a new substation and upgrading structures to enhance energy reliability for customers in East St. Louis and surrounding communities. The new power lines will create alternate pathways with other substations to re-route and deliver power if an outage occurs. Completed in November, the new $14.5 million Ridge Substation provides what Ameren says is added resiliency and enhanced power service to 30,000 customers in the area.