Southern Illinois University Edwardsville alumnus Justin Schulz has been recognized as the 2020 Officer of the Year by the Gulf Shores Police Department in Gulf Shores, Ala. Schulz earned a bachelor’s in criminal justice studies in 2014.

“It was an absolute honor to receive this award knowing there were several other officers in contention who hold high caliber standards,” Schulz said. 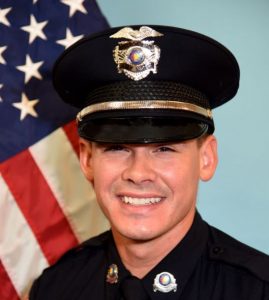 This is not the first time Schulz has been recognized by his department. Along with being selected as Officer of the Month several times during his career with GSPD, he and another officer were also awarded the 2019 Lifesaving Award for their efforts in performing lifesaving procedures for an individual who went into cardiac arrest.

“When the criminal justice studies faculty learned that Justin received the 2020 Officer of the Year award from the Gulf Shores Police Department, we were very proud to see one of our alumni receive such an honor,” said Kevin Cannon, chair of the Department of Criminal Justice Studies in the SIUE College of Arts and Sciences. “He is a perfect example of the professional, ethical police officer and criminal justice system representative that we hope all of our graduates will become.”

Following his graduation from SIUE, Schulz joined GSPD. He then joined the special weapons and tactics team in 2016, and the field training unit in 2019 where he began serving as a field training officer.

Inspired to follow the footsteps of other family members who are police officers, Schulz said he wanted to be a part of something bigger than himself and to be called upon to protect those who are unable to protect themselves.

Schulz said, “The best part of this job is the camaraderie among officers. Walking away from critical incidents together knowing you prevented a person from seriously injuring someone and/or themselves or saving someone’s life is very rewarding.”

On why he chose SIUE for his education, Schulz stated that SIUE has a strong based core surrounding the criminal justice studies program, and it provided many opportunities to get involved such as associations and club sports.

“The professors held an unwavering commitment to pass on the knowledge and experience to help prepare me for my career,” Schulz said.