A bus driver from St. Clair County is being recognized for heroics in a rescue of a stranded toddler last April.

Bi-State Development Board of Commissioners presented a special proclamation during its June 25 regular meeting to MetroBus driver Nicholas “Nick” Autoomp of East St. Louis, in recognition of exceptional service and dedication on the job.

“We expect good work from our employees in the field, but when somebody does something exceptional, it deserves special recognition. What Nick did was heroic. It was very brave,” said Justin Zimmerman, vice chair of the Bi-State Development Board of Commissioners.

Board Chair Rose Windmiller shared her congratulations to Autoomp for a job well done and thanked him for everything he does for Metro Transit and the community.

The board proclamation honors Autoomp for his quick action and noteworthy display of compassion in April when he saw a young boy all alone who needed protection and assistance and stopped so he could keep the toddler safe from injury and shelter him from the unseasonably chilly weather that day.

Autoomp was driving the No. 8 Alta Sita bus route in East St. Louis, when he noticed the toddler, approximately 2 years old, wearing only a diaper and sitting all alone in a vacant lot on North 18th Street near the MetroLink tracks. Remembering his training, Autoomp immediately stopped his bus and sprang into action to rescue the young boy, getting him out of the weather and onto the safety of the bus where he wrapped him in his coat to warm him.

He contacted the MetroBus Operations Center and explained the situation and they immediately alerted the police. Autoomp comforted the young boy and gave him water and chips from his own lunch he had packed. Another motorist who also saw the child in the field stopped and wanted to put the boy in his car, but Autoomp was determined to protect the child until police arrived and could reunite him with his family.

Metro Transit vehicles are designated as safe places for children and adults to go for help in the bi-state area.

“We ask our operators to show up every day and they do in what are difficult circumstances. I want to remind everyone it is not easy to operate our machinery and we have hundreds of team members who do that every single day,” said Taulby Roach, Bi-State Development president and chief executive officer. “In this case, Nick really went above and beyond, showing compassion, reaching out to the humanity of our customers and even those who may not be our customers in a really extraordinary action. I have the pleasure of recognizing Nick for performing those actions above and beyond the call of duty.”

Autoomp, who has been working for Metro Transit for six years and is currently a bus operator in St. Clair County. He said he appreciates the training he received from Metro Transit that has him prepared for anything he might encounter on his route.

“It was heart breaking to see that child all alone,” said Autoomp. “I have a daughter who is a little bit older than him. The bus is a safe haven. I am not a hero. I was just doing what I thought was the right thing to do.” 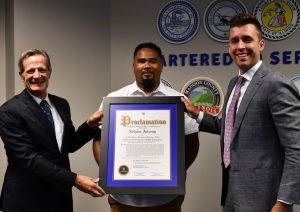