By JERRY NOWICKI
Capitol News Illinois
jnowicki@capitolnewsillinois.com
SPRINGFIELD – Gov. JB Pritzker stressed the importance of COVID-19 vaccinations Monday as positivity rates and hospitalizations continued to decline but variants of the virus have proven to be more transmissible and dangerous to those who are not vaccinated.

The governor cited a central Illinois youth camp that has led to more than 85 associated COVID-19 cases. 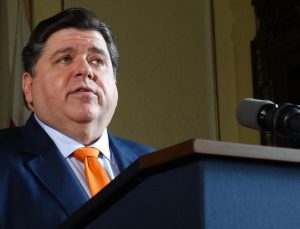 The governor said at least one “unvaccinated adult” from the central Illinois camp was hospitalized after the outbreak. According to an Illinois Department of Public Health news release, “although all campers and staff were eligible for vaccination, IDPH is aware of only a handful of campers and staff receiving the vaccine.”
While the majority of the linked cases were teens and the perceived risk to youth is often small, IDPH Director Dr. Ngozi Ezike said in a news release that long-term symptoms can be serious and youth spread can be transferred to those with compromised immune systems.
Some attendees of the camp also later attended a nearby conference, leading to 11 more cases of the virus. The outbreaks occurred in Schuyler and Adams counties, according to a news release.

The state health department is working with the U.S. Centers for Disease Control and prevention to handle the outbreak and “is in the process of identifying the presence of any specific variants in this outbreak.”

IDPH had identified 9,697 COVID-19 variants in the state as of Monday. That includes 84 instances of the Delta variant, which prompted a high-ranking official at the World Health Organization to warn this week that vaccinated individuals should still be wearing face coverings to protect against community transmission.

“Vaccine alone won’t stop the community transmission. …People need to continue to use masks consistently, be in ventilated spaces, hand hygiene, respiratory etiquette, the physical distance, avoid crowding,” Dr. Mariangela Simao, WHO assistant director-general for access to medicines and health products, said according to transcripts of a news briefing.

Pritzker said his administration expects the Delta variant, which has proven more transmissible and dangerous to unvaccinated individuals, “to dominate our cases statewide by the fall.” He and others appeared masked at a news conference in Chicago that was called to celebrate the opening of a business center in the North Lawndale community.
He said he was wearing a face covering, even though the state no longer requires one for those who are vaccinated, because he thought it was “appropriate to do so.”

“I would say, from my own perspective, if you’re going into a heavily crowded area, you don’t know if somebody is not vaccinated, and so you should just bring your mask with you and keep safe,” he said of individuals regardless of vaccine status.

“The lessons here at home and across the world are a harbinger of what could happen here, particularly in low vaccinated areas,” he said.

Still, Pritzker said, that left more than 5 million Illinoisans not fully vaccinated and therefore “unprotected.”
Several Illinois counties have vaccination rates under 25 percent. Those include Fayette County at roughly 23 percent in southern Illinois, Henderson County at roughly 21 percent in west-central Illinois, Hamilton County at roughly 24 percent in southern Illinois and five of Illinois’ southernmost counties, Hardin (24.5 percent), Pope (23 percent), Pulaski (22 percent) and Alexander (14 percent).
As of Monday, the seven-day rolling average for vaccinations administered daily was 43,219, roughly equal to the pace it was on the day the state announced a $10 million vaccine lottery that will include anyone who has received a shot in the state. The 96,042 doses reported administered Saturday, however, were the most in one day since May 20.
While the state’s case positivity rate saw a small uptick of 0.1 percentage points Monday from the day prior on a rolling seven-day average, that number remained near a pandemic low. Hospitalizations also remained near pandemic lows, with 433 patients in hospital beds as of Sunday night, including 108 in intensive care unit beds and 46 on ventilators.
While the confirmed death toll has risen to 23,219 since the pandemic began, the state saw fewer than 10 COVID-19-releated deaths for seven of the past eight days as of Monday.