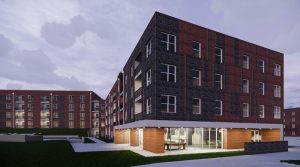 Rendering of the second phase.

Swansea-based Holland Construction Services has begun construction of the second phase of the Sunnen Station Apartments complex near Manchester and South Hanley Roads in Maplewood, Mo.  This new four-story, 121-unit apartment community will include an attached 61,000-square-foot, two-level parking garage with 187 spaces and indoor/outdoor recreational facilities.

Holland completed Phase I of the complex in 2017. It sits adjacent to Phase II and will be connected by a shared parking lot. The complex is also adjacent to the Sunnen Station MetroLink Station and the Sunnen Business Park. This multi-family community, developed by the Sunnen Family in conjunction with Cozad Commercial Real Estate, is the first new apartment construction in the City of Maplewood in several years.

G.T. Cozad, principal at Cozad Commercial Real Estate, said after seeing the success of the first project, Sunnen knew it wanted to do something that resembled Phase I, but was a little bit different.

“Phase I of Sunnen Station Apartments is currently 100 percent occupied so we have found there is clearly a need for this type of development in the area,” said Cozad. “The new development will include many of the same modern amenities as Phase I, including on-site recreational facilities such as a fitness center, and a swimming pool.”

Michael Cozad, principal at Cozad added, “Holland has tremendous expertise in this area and did a fantastic job on Phase I of this project so it was an easy decision to involve them in Phase II. The City of Maplewood has also been a good partner for us so we were happy to continue development in this location.”

Holland Project Director Will Stajduhar said the 120,000-square-foot, multi-family development is a standard project for his team and most of the major earthwork is now complete. The next steps will be pouring the footings on the retaining wall and setting up on-site utilities.

“One unique feature of this building is that we had to accommodate the layout of the land in our design plans,” said Stajduhar. “The north section of the building is like a five-story building and we created it this way to adapt to the elevation in that area. Multi-family is one of our specialties and the fact that we’ve worked with this owner and developer before and are familiar with this project site will make this project run very smoothly.”

The expected completion date for Sunnen Station Apartments Phase II is May of 2022. For more information about the development, go to www.sunnenstationapts.com