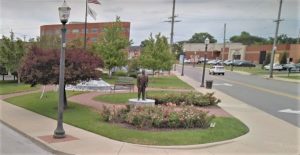 City Plaza in Edwardsville, the centerpiece of which is the Ninian Edwards statue, shown here while still on its base.

Edwardsville Mayor Art Risavy says a statue dedicated to the city’s namesake has been taken off its pedestal and will be relocated at ground level elsewhere in the same park.

The action serves to address public input that surfaced regarding Ninian Edwards, the onetime governor of the state who owned slaves in the late 1700s and early 1800s.

In 2008, a statue funded by local donations was dedicated to Edwards in City Plaza, a park formed by the triangular wedge intersection of Vandalia and St. Louis streets in downtown Edwardsville.

Discussions about removing the statue came to fore last year in the wake of the death of George Floyd and the protests that followed.

After months of deliberation between members of the City Council and public comment at both committee and City Council meetings, Risavy directed staff to remove the statue from its pedestal and install the statue on a concrete pad.

“I want to thank those who participated in the discussion, both for and against the removal and/or relocation of the statute,” Risavy said. “I believe removing the statue from its pedestal and relocating the statue in the park is in the best interest of the city at this time.”

A bronze plaque or an educational lithograph will be installed near the statue that will offer a more complete history of the life of Ninian Edwards, from his past as a political figure, Illinois State Senator, and third Governor of the State of Illinois to his influence in the settling of Madison County. The City of Edwardsville will apply for a grant to be used to pay for the plaque later this year.

“While the City realizes the past cannot be erased, we can certainly learn from it and use history as a tool for improvements in the future. One of my goals during my term is to increase diversity within our volunteer committees and our workforce,” said Risavy in a statement.

Risavy also provided an update on the City’s Human Relations Committee, whose mission is to improve race relations and generate positive dialogue about issues the city faces and for the betterment of the community.

Paul Pitts, SIUE’s retired assistant chancellor of affirmative action and diversity, is pleased with the direction of the new committee.

“As a member of the former Human Relations Commission, I appreciate the diversity and the inclusivity of the members encompassing the new committee.” Pitts said. “Equally important, given the social and racial climate that’s challenging us as a city, state, and nation, it’s key that committees such as this exists to help connect the community and elected officials with the citizens it represents.”

In March 2021, the city held an open forum at the Wildey Theatre to discuss affordable housing options and grant opportunities.

According to City Planner Emily Fultz, “A cursory study evaluating housing affordability was recently completed and brought to light the correlation between affordable housing and gaps in wages.”

“The city will seek a qualified consultant to examine affordable housing in Edwardsville and to help the City create goals and strategies for this important component of our community,” said Fultz.

The city said it will continue to share information about the Human Relations Committee, affordable housing evaluations, ongoing diversity and inclusion plans and long-term goals as they arise. For more information call the administration office at (618) 692-7531. To learn more, visit http://www.cityofedwardsville.com/.