Edwardsville Police Chief Jay Keeven will be taking over as the new city administrator of Troy, replacing Doug Partney on July 1.

Partney stepped down from his role as city administrator about a month ago to take a job with Clayco Construction. 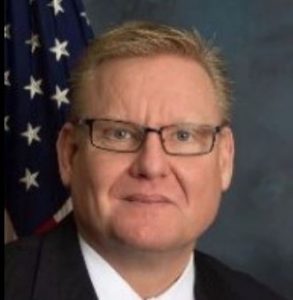 Troy Mayor Dave Nonn said, “I think Keeven is going to be a great asset. The way the city is growing we needed someone who was educated in administration to move us into the future”.

The youngest of seven children, Keeven (shown) was born and raised in Highland where he started his career in police as a dispatcher for the Highland Police Department and worked there until he turned 21. At that time, Keeven became a patrolman for the Illinois State Police in the Chicago area.

He worked his way through the ranks for 27 years until he retired in 2013 as a major in the Operational Services Command to become the Edwardsville Police Chief. Keeven filed his resignation with Edwardsville City Administrator Kevin Head on June 17 effective June 30.

In addition to his educational background, Keeven said his time with the City of Edwardsville helped prepare him for his new roll as city administrator, saying Hal Patton’s big push during his eight-year tenure as mayor was for all department heads to meet at the same time with developers so they would understand everything that was expected to get their project approved through the City Council.

“I got to absorb in those meetings what other departments said they needed the developer to do, such as having a sewer hook-up in a certain location, sprinklers for a building over a certain size, or number of parking spots. It gave me a thirst to take the next step,” Keeven explained.

The idea of becoming a city administrator has been in the back of Keeven’s mind for some time, as another city had approached him about become city administrator awhile back, but the timing was not right. Keeven mentioned this to previous Troy Police Chief Brad Parsons, who asked Keeven if he could give Nonn his name as a candidate when Partney announced he was leaving.

Keeven has met a couple times with the council and staff and believes “everyone is on the same page for the growth of the city, with a focus on smart growth.”

In his new role, Keeven will be responsible for just under 30 city employees, not including the police, as police chief Brent Shownes is appointed by and reports directly to Nonn with department issues.

Keeven said Troy holds the same attractiveness as Edwardsville as an employer, because “you can tell the elected officials love their community”.

Keeven lives in Edwardsville with his wife Shelly and son Dane who will be attending Father McGivney Catholic High School this fall. He also has two grown daughters, Emily and Maggie.