Prizes include cash payments up to $1 million, scholarships of $150,000

SPRINGFIELD – Any vaccinated Illinoisan will be automatically entered into a lottery for $10 million in prizes without having to take any extra steps to enter.

Gov. JB Pritzker announced the “all in for the win” vaccine lottery at an event in Chicago, noting it would award $7 million in cash prizes for adults 18 years of age and older, as well as $3 million in scholarship awards for Illinoisans ages 12 to 17.

The first drawing will be conducted by the Illinois Lottery on July 8 and drawings will continue into August. Prizes will include cash payments from $100,000 to $1 million. Scholarships would be in the form of Bright Start 529 savings plans worth $150,000 each.

The money is allocated from federal American Rescue Plan funding, of which the state received more than $8 billion.

Drawings will be conducted statewide and individually in the state’s Restore Illinois regions that coincided with mitigation efforts throughout the pandemic. In the final drawing August 26, the winners of the final two of three $1 million prizes will be chosen from a statewide pool. 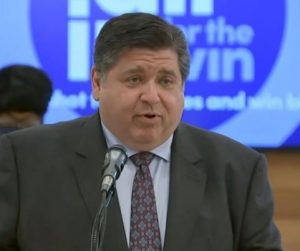 To receive a vaccine, Illinoisans were required to give their information to the medical professional who administered the vaccine, so Pritzker said that is how the names will be chosen for the drawings. Anyone having received at least their first dose by July 1 would be eligible for prizes in the first drawing.

Those who win would be contacted by the Illinois Department of Public Health, who will seek permission to share the winner’s name with the Illinois Lottery. IDPH will not share information without a recipient’s consent, according to a news release.

More information is available at allin.illinois.gov.

Pritzker made that announcement as the state’s positivity rate continued to plummet and as nearly 70 percent of the state’s 18-and-older population had received at least one dose of the vaccine, according to the Illinois Department of Public Health. That number was 67 percent for Illinoisans 12 and older, and 89 percent for those 65 and older.

Pritzker and IDPH Director Dr. Ngozi Ezike said they were hopeful that the lottery would increase vaccine participation to continue to drive positivity rates and hospitalizations downward. They noted vaccinations remain free for Illinoisans at a variety of locations, such as mass vaccination sites, local health departments, chain and small pharmacies, doctors’ offices and Federally Qualified Health Centers.

“While our vaccination numbers in Illinois are good, we can’t stop there. We still need more people, as many people as possible, and there is a pool of 3 million eligible people who are not yet vaccinated. We still need you to step up and get vaccinated,” Ezike said.

Ezike and Pritzker also noted that more dangerous variants of the virus are gaining steam, and as long as there are unvaccinated individuals in whom the virus can find a home, it could continue to become more dangerous as a variant.

According to the IDPH website, the state has identified 64 cases of the delta variant first found in India. That strain is a “variant of concern,” according to federal health officials, and could be more transmissible and cause more severe symptoms for those who are unvaccinated.

“We have to stop this virus from circulating before it mutates to the point that we get a variant that threatens the vaccine immunity that the 70 percent of us… are already pursuing. And the way to stop that is through vaccination,” Ezike said.

But as of Thursday, things were going well in Illinois, with the case positivity rate sitting at 0.7 percent, a sustained pandemic low. Hospitalizations continued to fall to new lows as well, with 524 COVID-19 patients in hospital beds, including 138 in intensive care units, both the lowest numbers of the pandemic. There were 74 people on ventilators as of Wednesday night, one more than the pandemic low of the night before.

But even as those numbers decreased, another 16 Illinoisans were reported to have died over the previous 24 hours, bringing the death toll in Illinois to 23,120 confirmed deaths since the pandemic began, along with 2,432 probable deaths.

Donna Thompson, CEO of ACCESS Community Health Network where Pritzker announced the lottery, noted the inequities the virus has laid bare, especially in the predominantly Black and brown communities in the Chicago area which her organization serves.

“We have seen up close the devastating effects that the virus has had on our communities and how health disparities and inequities have also compounded the risk for our patients and local residents,” she said. “We are also seeing disturbing divides across our communities – those that are vaccinated, and have the freedom to go and return to a normal life, and then those that are unvaccinated, and are restricted due to their status, and often cases, presenting with serious cases of COVID at our health centers, or worse, at local emergency departments.”

While the state entered Phase 5 of reopening this month, lifting all capacity restrictions, the Illinois Department of Employment Security announced Thursday that Illinois’ May unemployment rate remained at 7.1 percent, or about 22 percent higher than the national average of 5.8 percent.

PHOTO: Gov. JB Pritzker speaks at an event in Chicago Thursday to announce a $10 million lottery in which vaccinated Illinoisans will be automatically entered. (Credit: Blueroomstream.com)