Hungry for a Peachy Pattie? How about a Stuffed Crawfish Burger or Italian Stallion Burger? From Carlinville to Collinsville, 22 local restaurants are showcasing their Epic Burgers during Epic Burger Week June 14 – 18 in southwest Illinois. 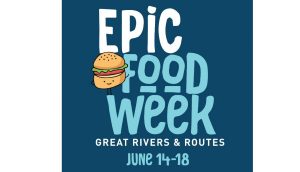 “We know people enjoy coming to southwest Illinois for our delicious destinations,” said Cory Jobe, President/CEO of the Great Rivers & Routes Tourism Bureau. “And we realized we have some really creative restaurants who have taken the traditional hamburger to the next level. This is our chance to create awareness of those restaurants and their burger creations.”

“Locally owned and operated businesses have some terrific burgers,” Jobe noted. “Promoting Epic Burger week is just another way to steer visitors to those businesses in our six county Great Rivers & Routes region and encouraging them to take a bite out of some great burgers.” Jobe noted.