The past year has brought no shortage of fires for Steve Cooper. In his off hours, he’s fire chief of the Holiday Shores Fire Protection District. But during the weekday, he’s senior vice president of First Mid Bank & Trust in Edwardsville, where he’s been helping customers steer around a pandemic. 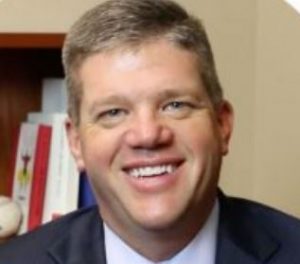 “It’s certainly been a unique year and it hasn’t been traditional banking,” he said, referring to his reliance on Zoom, phone and video. “But our customers faced those same challenges, and they put us all on a sustained learning curve.”

A lot of traditional loans were replaced by hundreds of hours spent processing Paycheck Protection Program loans, or PPP.

“We were able to help a lot of borrowers,” he said.

Despite the COVID-19 impact, the bank overall had a good year, he said.

“Most of that was based on established banking relationships and the heavy influx of PPP loans. Now, we have to work with our customers through the forgiveness process (of the PPP loans), which will take another couple of months to get done.”

Then, it will be back to more traditional banking, “which is good, because our pipeline is picking up,” Cooper said.

First Mid is now in the process of integrating with Providence Bank, a purchase that was officially completed in February. First Mid signs are now in place at those former Providence locations.

“It’s a nice footprint, we’ll be able to serve those markets well,” Cooper said, noting that First Mid has a robust wealth management department and one of the largest bank-owned insurance agencies, First Mid Insurance Group, in the state of Illinois.

“The new Providence customers will be introduced to our wealth management and insurance business lines and most importantly they’ll benefit from the ability to develop relationships with First Mid across their business needs. Our ability to go deep with products and services and the sheer size of First Mid will be evident to our new business customers,” he said.

The bank’s value is estimated at $5.8 billion.

Cooper’s time with First Mid dates to its 2016 acquisition of First Cloverleaf Bank, where he began working in 2011. His career though began in 1989 as a 16-year-old Edwardsville High School office occupations student with what was then Landmarks Bank of Madison County, then Magna Bank and then Union Planters Bank. He was there 11 years before going to work at the Bank of Edwardsville.

Cooper is first to say that he learned from a great generation of bankers in Madison County, among them John Fruit, Bob Wetzel, Tom Holloway and Dennis Terry.

“Four of the strongest community banker names that you can think of,” he said.

Early on, his career focused on mortgage and retail lending, but nowadays, he concentrates on commercial credit.

Along the way, Cooper got a Bachelor’s Degree in Economic Management from Southern Illinois University Edwardsville.

The 48-year-old grew up near Moro but has lived in Holiday Shores about 25 years. He and his wife Shauna have two children, 15-year-old Kaylah and 11-year-old Brian.

When he’s not playing banker, the fire chief job keeps him busy, he said. Recently he had to travel to Luverne, Minn., to pick up a new, $307,000 firetruck.

“I had to drive it home 10 and a half hours. It made for a couple of bouncy days,” Cooper said.

He added: “It’s my unpaid second job, a labor of love.”

This story is featured in the June edition of the Illinois Business Journal. For more stories from the edition go to the Current Edition link at ibjonline.com.