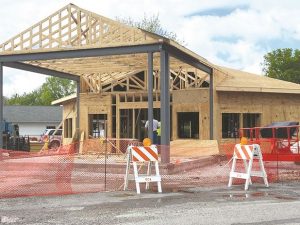 NEW BADEN – Clinton Manor Living Center, a provider of skilled nursing, is constructing an administration addition expected to be completed this summer. The general contractor for the project is D.C.A. Construction Inc. in Breese.

The exterior of the addition will have handicap accessible entry doors and a covered driveway to provide shelter when entering or exiting transportation vehicles. The building’s parking lot will also be improved.

Over the years Clinton Manor has evolved by providing a variety of services to fit the needs of the community. The building has also undergone several renovations. Here is a brief look at the changes Clinton Manor has made over the past 52 years.

• Clinton Manor opened its doors in 1969 as a shelter care facility for 43 individuals.

• In the early 1970s, its license was changed to a long-term care facility and expanded to 69 bed capacity.

• In the mid 1980s, Clinton Manor became a specialized facility supporting individuals with developmental disabilities, and continued to provide a small unit for senior citizens as an intermediate care facility.

• In 1990, an addition was built to increase services to 50 individuals with developmental disabilities and 30 senior citizens.

• In 2004, they added a separate building to house the Laundry and Maintenance departments.

• In 2018, an addition was built to connect the main building to the laundry room, along with three additional bedrooms, a large shower/bathing area, storage and a laundry/linen area.