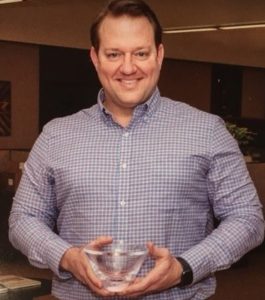 John McDole, vice president and commercial portfolio manager with Busey Bank in Edwardsville, has been named Busey’s Volunteer of the Year for donating nearly 200 hours of his time to the community during 2020.

Busey announced the honor this week.

“For the longest time I traveled a path where even though I was achieving so much personally and professionally, I was still trying to experience success,” McDole told Busey for an article published in the spring issue of The Pillar. “Over the last five years I’ve learned I have a passion for giving my time and sharing my skills — and now I know my personal definition of success is to do work that leaves a legacy for others.”

He also serves as chairman of the city’s Plan Commission and as a member of the Nickle Plate Station Board, a group dedicated to the preservation of a train station built  in Edwardsville in 1883.

As part of his Volunteer of the Year Award, McDole received $1,000 to donate to Edwardsville Neighbors, a group that works to ease financial burdens of local families.

Photo from The Pillar published by Busey Bank.