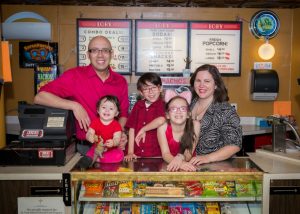 Frozen custard sold at The Lory Theater while it was closed due to COVID now has a new, permanent home and name: Mac’s Family Fun Time

Lory Theater owners Justin and Hillary McLaughlin found a silver lining to the pandemic closure of their Highland business: They learned how to make frozen custard and gourmet popcorn. This knowledge acted as a spring board into a new business venture. The two products will act as a cornerstone to what will ultimately be a family entertainment center. The concept of Mac’s is not a new one as the couple has been planning for the new company since 2018.

Mac’s is located at 13229 U.S. 40 in Highland. The building, originally built as a church, was the home of dance instruction company “Dance House” from 2007 until recently vacating with the sale of the building to the McLaughlins, which closed May 31.

The frozen custard shop will be able to expand its operation into 7,000-plus square feet of current building and eventually utilize seven acres of land. Immediate plans are to open with frozen custard, gourmet popcorn, birthday party hosting, and indoor bounce houses. A small children’s arcade is planned for later this year. The future expansions include an eighteen-hole miniature golf course and an electric go kart track.

“The name is a tribute to our grandfathers,” Hillary said. “Justin’s grandfather’s nickname was Mac, and my grandfather drove a Mac truck for years. It’s a fun family reference.”

“We’re going to really focus on the birthday party packages,” says Justin. “We would get so many requests for parties at The Lory, but there was never a good way to make it work for us logistically. So, we’re going to make it awesome at Mac’s.”

Visit the new website for hours and birthday party scheduling at, www.macsfamilyfun.com