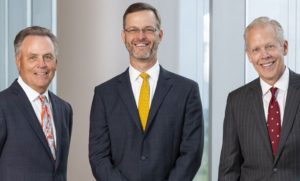 Armstrong Teasdale, which has offices on both sides of the Mississippi River, announced that effective June 1, David W. Braswell has been elected chairman of the firm and Patrick W. Rasche has been elected managing partner.

Also effective on June 1, Michael A. Chivell, who has spent the majority of his career at the firm and served for five years as chairman, will assume the role of chairman emeritus.

In the past two and a half years, Braswell (right in photo) proved instrumental in the firm’s growth, adding offices in Edwardsville;  New York, New York; Salt Lake City, Utah; Philadelphia, Pennsylvania; Wilmington, Delaware; Boston, Massachusetts; Princeton, New Jersey; and London, England. Today, the firm boasts more than 640 lawyers and staff in 13 offices throughout the U.S. and in the U.K. Braswell, who has served as managing partner since 2019, joined Armstrong Teasdale in 1995 and has also served as a member of the firm’s Compensation Committee and Executive Committee, and as leader of the Corporate Services practice group.

“During his tenure as managing partner, David effortlessly combined his skill set as an M&A lawyer with his strategic vision for the firm, and has expanded our footprint and deepened our talent pool around the world,” said Rasche. “I look forward to working alongside David to continue building on that legacy, and I am honored to have the opportunity to do so.”

While actively practicing, Braswell was involved in numerous high-profile mergers and acquisitions nationwide. He frequently served as lead counsel to corporations and their boards of directors, providing guidance on transactional and compliance issues, and helping them shape and execute their strategic plans and operational goals. For more than a decade, Braswell has been ranked in Chambers USA: America’s Leading Lawyers for Business for his depth of corporate experience and has been consistently recognized by other industry organizations.

Rasche (center in photo), who has worked closely with Braswell over the years – as fellow working attorneys, practice group leaders and on various firm committees – has been at Armstrong Teasdale for more than 23 years, 17 of which he served as Intellectual Property practice group leader. Rasche has extensive experience in leadership and management, as well as coordinating new business efforts, and has been heavily involved in retention and recruiting efforts. Rasche also served on the firm’s Compensation Committee and Executive Committee.

In his legal practice, Rasche focuses on guarding the intellectual capital of both companies and individuals. Registered to practice before the U.S. Patent and Trademark Office, he helps clients protect U.S. and foreign patents in a broad range of diverse technologies. He is an experienced IP practitioner and former patent examiner.

Active in the professional community, Rasche is a member of The Missouri Bar, Illinois State Bar Association and American Intellectual Property Law Association. He’s been consistently recognized in Chambers USA and as an IP Star by Managing IP. He is also listed among The Best Lawyers in America for Patent Law.

Chivell (left in photo) started at Armstrong Teasdale in 1983 as an associate and spent the next 23 years focused on the practice of corporate law. He served as leader of the then-named Business Services practice group (today known as Corporate Services), was a member of various firm management committees including the Executive Committee, and has served in various capacities for the U.S. Law Firm Group, including as trustee, president, executive committee member and currently executive director. Chivell served as managing partner from 2007 until he was elected chairman in 2016. As chairman, Chivell focused on client relations, strategic planning, community relations and lateral recruitment.

“We are indebted to Mike for his decades of service and lasting impact,” said Braswell. “I’m honored to have worked closely with him for many of those years. His influence on this firm as a working attorney, as managing partner, as chairman, as a friend and mentor – and now chairman emeritus – simply cannot be measured.”