Bill heads back to Senate for approval

SPRINGFIELD – The Illinois House passed a bill that would lower small trailer license fees from $118 to $36, which lawmakers said on the House floor Sunday could remedy an issue that has resulted in an uproar of complaints from their constituents. 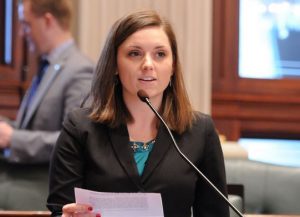 In 2019, lawmakers raised the fee for licensing a small trailer in Illinois from $18 to $118 as part of Gov. JB Pritzker’s Rebuild Illinois capital infrastructure plan.

Senate Bill 58, sponsored by Rep. Marcus Evans, D-Chicago, lowers the annual fee to a compromise $36, along with removing a $10,000 cap on sales tax credits on vehicle trade-ins.

Both of these proposals were held up in the House Revenue and Finance Committee as lawmakers worked on a compromise.

Stuart and Bourne’s bills would have lowered the fee back to the previous cost of $18. But the Transportation for Illinois Coalition – a group of statewide and regional business, organized labor, industry, governmental and nonprofit organizations which lobbied for the capital bill’s passage in 2019 – warned that lowering the fees would take revenue away from state construction projects.

“I think this is long overdue as a correction,” Bourne said on the House floor. “I wish it was down to $18, but we can’t get everything we want in this building. Hopefully this helps everyone who has gotten calls about the trailer fee.”

Bourne also clarified with Evans that individuals could keep their same license plate and simply renew it under the bill.

SB 58 also restores the full credit trade-in rates that had been capped at $10,000. It passed unanimously out of the House and will now return to the Senate for concurrence.