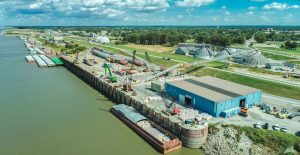 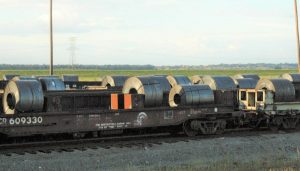 A 60-mile section of Route 3 that runs parallel to the Mississippi River in Illinois on the eastern side of the bi-state St. Louis region anchors an industrial corridor that is one of the premier manufacturing logistics hubs in the Midwest.

With exceptional multimodal infrastructure that supports complex and integrated manufacturing operations, this corridor continues to evolve and grow by repurposing vacant industrial sites through infrastructure investment and public-private partnerships. It is home to more than 6,000 businesses, or about 100 businesses per mile, making it a significant economic engine for the St. Louis region. 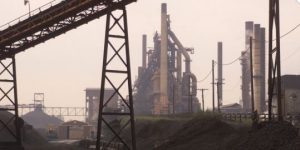 The final virtual session of FreightWeekSTL 2021 explored the unique ecosystem of this corridor that is sparking new industrial development interest, revealing what supporters call a hidden gem.

“We’ve enjoyed the fruits of the corridor and been part of it for nearly 150 years,” said panelist Mike Patton, general manager of U.S. Steel, an integrated, flat rolled steel manufacturing operation in the heart of the Illinois Route 3 corridor.

U.S. Steel currently employs 1,700 workers at the facility, and more than a million tons of flat rolled steel per year. It services different types of industries, but primarily the construction and energy markets, as well as service centers and automotive. The manufacturing site is located on about 2,000 acres, which sits just a half mile east of Route 3 and near the Mississippi River, and U.S. Steel ships a high volume of product via rail, barge and truck. Given its long history, the company has seen many changes over the years.

“But one thing that’s been fairly constant is we rely heavily on getting product to us, as well as shipping our product, and being geographically located in the Midwest, as well as having all of those transportation ways, if you will, there’s been a huge advantage for this facility and one of the reasons we’re still here,” said Patton.

While the steel mill’s origins may date back to the 1870s, U.S. Steel continues to modernize equipment with  continued reinvestment. The mill also has been a catalyst for other investment along the Route 3 corridor, due to the fact that a large portion of the product that it sells gets further processing, and many of those partners want to be close to the steel mill.

“Obviously, they’re here because they also enjoy the advantage of what we’re talking about with the infrastructure. We have a tremendous labor pool, obviously a really long history of really good skilled labor. So that’s certainly an advantage,” Patton said. “I can only see that further development and that, as we continue to grow and evolve, that people have land to build on and hopefully process some of our steel and help us all be successful into the future.”

Steve Zuber, principal with Barber Murphy, a commercial real estate brokerage firm that recently celebrated its 15-year anniversary, said the corridor’s long history of industrial businesses operating along its path has set the stage for the reinvestment that has been occurring and for future revitalization.

“I’ve always seen it as a diamond in the rough,” said Zuber. “As I look at the landscape today, I see the majority of these legacy properties have either been demolished, repurposed or redeveloped, and the region is really starting to sparkle.”

He pointed to the former stockyards area in Fairmont City and East St. Louis, which have been seeing a lot of activity in the wake of the opening of the new Stan Musial Veterans Memorial Bridge, which really opened up that area in Southwestern Illinois to development. Zuber said most of the premium ground along Exchange Avenue has been purchased and is home to Newman Carriers, Tank Trailer Cleaning, Aspen Waste, House B Truck Sales, Apex Recycling and others.

“Fifteen years ago, you couldn’t give that ground away. Now it’s being sold at a premium of two dollars per square foot. Companies like Bailey Foods, Illinois Electric Works, Quality Rail and Custom Steel have all taken advantage of some of the older legacy buildings and repurposed those buildings for more modern-day use,” Zuber said. “When you look at America’s Central Port, which has invested millions of dollars in this former military base, repurposing old buildings and adding container-on-barge operations, they’re at maximum capacity right now.”

Terminal Railroad Association of St. Louis recently acquired about 100 acres of ground in the former stockyards area Zuber referred to, and is clearing the overgrown area, getting ready for future development. TRRA is a 130-year-old regional short line, with 230 full-time employees, five Class I owners, and serves 80 local industrial customers, including U.S. Steel. It operates on 50 miles of mainline track and two rail bridges across the Mississippi River, the largest freight rail river crossing in America, with the second largest rail freight interchange based in the U.S. behind Chicago and third largest by tonnage. TRRA has extensive property on both the Illinois and Missouri sides of the Mississippi River, but what makes TRRA unique, according to Matt Whitney, director of Business & Industrial Development for TRRA, is its connectivity and location in the region.

“The rail service along this corridor is unique; it’s whatever a manufacturer or rail shipper wants,” said Whitney. “You have the six Class 1 railroads you can ship with directly or through the Terminal Railroad. There’s five intermodal facilities, if not on the border within a five-to ten-minute drive. And what we do is we’re that last mile service provider. So, we provide a safe interchange of goods between Class 1 railroads and their end users. The river, the rail and the interstate access in this area truly give you the best multimodal options.”

Whitney said those same advantages have been the hallmark of this corridor for a long time, as evidenced by maps dating back to the early 1900s, and the advantages are key to continued growth in the Illinois Route 3 corridor.

“I think people would be amazed if they really saw the Route 3 corridor and how the manufacturing went down to the river and how the rail roads supported that along with the barges. I think the opportunity is to redevelop that along with the old stockyards locations and some of the property TRRA has purchased,” Whitney said. The company owns hundreds of acres along Route 3, including almost 100 acres at the old national stockyards site, and further north, a 100-acre cornfield TRRA is currently working on developing with Zuber.

“We need to really start marketing that property,” said Whitney. “I think the Terminal Railroad could really kick off this Route 3 Corridor to get this property site ready and get it marketed.” However, he added there will be some challenges, such as tax rates, that are going to be an issue in getting those sites ready to go.

Doug Rasmussen, moderator of the panel session and President & CEO of Steadfast City Economic & Community Partners, agreed and highlighted that private and public partnerships are another key to the continued growth of the Illinois Route 3 corridor and have been a factor with many of the companies that have expanded and grown there.

While Zuber also agreed there will be some challenges, he is quick to point out the many positives that also exist. “The Route 3 corridor from Dupo to Alton has some very favorable zoning ordinances in communities that are going to welcome heavy manufacturing,” Zuber said. “The Route 3 arterial route, which is a four-lane highway, is relatively uncongested and traverses parallel to the Mississippi River. It intersects multiple interstates, rail and river access points. It has access to heavy utilities and a skilled labor pool. And many of these communities are relatively easy to work with and don’t have a lot of red tape to overcome.”

Zuber said there’s now a lot of activity in this market for rail storage sites and TRRA is going to be a key driver there as it has control over a significant amount of the ground in the East St. Louis, Venice and Madison communities. “We’re getting more calls coming in from people looking for sites. The Missouri industrial brokerage community is becoming more active in this market. I’m seeing many sites that have been sitting idle and overgrown now being cleared for industrial purposes,” said Zuber. “And, as you know, the creep continues along I-44 and I-70 in Missouri and just keeps heading further west. We’re sitting on an abundance of available land and I think we’re primed for some real improvements in the next few years.”

Mary Lamie, executive vice president of Multi Modal Enterprises for Bi-State Development and head of the St. Louis Regional Freightway, host of the panel discussion, also weighed in on the significance and potential of the corridor.

“The Illinois Department of Transportation announced more than $20 million dollars of funding over the last several years for sections of the Illinois Route 3 corridor, indicating this is a location for continued growth of the region’s global logistics hub and supporting existing and new companies,” said Lamie. “It seems we have all the ingredients with public and private sector support and the multimodal infrastructure to continue to make this happen.”

FreightWeekSTL 2021 sessions were held from May 24 through May 28 and featured industry experts and leaders in freight, logistics and transportation. The week-long event was delivered by St. Louis Regional Freightway, The Waterways Journal and Bi-State Development. To see video from the FreightWeekSTL 2021 panel discussions, visit www.freightweekstl.com.

The St. Louis Regional Freightway is a Bi-State Development enterprise formed to create a regional freight district and comprehensive authority for freight operations and opportunities within eight counties in Illinois and Missouri, which comprise the St. Louis metropolitan area. Public sector and private industry businesses are collaborating with the St. Louis Regional Freightway to establish the bi-state region as one of the premier multimodal freight hubs and distribution centers in the United States through marketing, public advocacy, and freight and infrastructure development. To learn more, visit thefreightway.com.