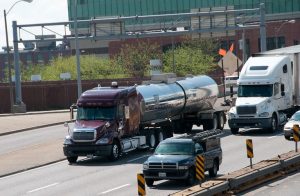 Trucks make their way along the Interstate 70 corridor in St. Louis.

Agriculture is currently the largest user of the freight transportation system in the nation, representing 27 percent of all freight ton miles with an annual value of $3.1 trillion. In addition, agricultural freight is expected to increase 23 percent over the next 20 years, with the majority currently moving on just 17 percent of highway mileage, including one corridor that spans the entire state of Missouri.

That was just some of the information shared during FreightWeekSTL 2021, underscoring the important role multi-state agriculture highway corridors play in supporting continued market competitiveness by providing global and national connections to the supply chain.

“The needs of agricultural freight are unique and not always accounted for in highway planning decisions,” said Adam Sparger, director, Transportation Services Division, U.S. Department of Agriculture, Agricultural Marketing Service, and one of the co-authors of the report. “We wanted to demonstrate how maintaining the performance of the highway system is essential to keeping freight costs low and supporting the continued economic competitiveness of U.S. agriculture.”

The modeling conducted as part of the report revealed some other compelling statistics. “We found that the top 80 percent of domestic agricultural highway freight by volume or value moves on approximately 17 percent of the modeled highway network. These are some of the most important corridors in the country for the movement of agricultural goods,” Sparger said.

The study further focused in on 17 different regional highway corridors within this “High-Volume Domestic Agriculture Highways” (HDAH) network and used some novel analysis techniques to illuminate how the condition and performance of these corridors — such as pavement, bridge conditions, congestion, reliability and safety — impact the efficient movement of agriculture products.

Among the 17 HDAH corridors analyzed in the report is Corridor #16 from Sioux Falls, South Dakota, to St. Louis. This corridor includes Interstate 70 connecting Kansas City to St. Louis, a portion of the seventh largest state-owned transportation system overseen by the Missouri Department of Transportation.

“This 600 miles from Sioux City, South Dakota, to St. Louis carries over five-billion-ton miles of agricultural goods each year. They largely consist of corn, soybeans, meat and different livestock, specifically between St. Louis and Kansas City,” said Tom Blair, MoDOT’s St. Louis District engineer, who leads a team responsible for about 6,000 miles of state-owned roads and about 10 percent of Missouri’s bridges. “These highways are essential to U.S. farmers, the agricultural industry and downstream producers.”

For DOT leaders like himself, Blair said reports with this type of data are valuable, helping to make sure they pay attention to that agricultural movement and not just to the average motorist.

“When I look at that corridor, it highlights that Missouri is an ag state. We are in the middle of the country. And as we talk about often, St. Louis is the third largest rail hub in the United States. The St. Louis Metro area ranks as the third largest inland port. And, as Mary (Lamie) often likes to talk about, St. Louis is the Ag Coast of America. I-70 is one of the key highway corridors feeding into all three of those things,” Blair said. Lamie is executive director of the St. Louis Regional Freightway.

He said the report shows that, throughout Missouri, I-70 has largely free-flowing traffic. To help ensure the continued smooth flow of freight throughout the bi-state St. Louis region, the St. Louis Regional Freightway annually creates a Priority Projects list that identifies key infrastructure projects and advocates for funding for them. This effort was one of just six case studies included in the comprehensive report featuring notable practices in freight planning and analysis.

“The St. Louis Regional Freightway case study shows the importance of engaging stakeholders and building consensus in a process of selecting, prioritizing and implementing infrastructure investment,” Sparger said. “The St. Louis Regional Freightway serves as a great example of how increasing cooperation in freight planning and project development along the entire length of a commodity corridor within a region can help to improve performance for commodities that travel through multiple jurisdictions.”

Several improvement projects on I-70 from Wentzville to Stan Musial Veteran’s Memorial Bridge over the Mississippi River are among those included on the 2021 Priority Projects List, which reinforces the strength of the I-70 corridor linking Missouri and Illinois as a major east-west logistics corridor and further supports MoDOT’s efforts to invest in I-70. These I-70 projects are now among the five-year program of projects recently made public by the Missouri Highway Commission.

MoDOT’s cross agency collaboration with the Missouri Department of Agriculture was the focus of another of the case studies highlighted in the report. “We worked with the Missouri Department of Agriculture to prioritize $450 million dollars in investment on 250 bridges that not only were moving passenger traffic, but we were really focused on which of these bridges can be most critical to the food supply chain and Missouri’s economy, Blair said. That was really good cross collaboration between our agencies that was highlighted in the report.”

The panelists also recognized the importance of collaboration as a driver of competitiveness.

“The international competitiveness of our agricultural exports relies on the efficient operation of our entire supply chain, not just at our ports or railways, but rural county roads and bridges, too, as well as the national highway network,” said Sparger. “So, our global competitiveness begins at home with the decisions we make about investments in transportation infrastructure.”

“Grain flows like water. It is going to follow that path of least resistance. And that’s very important as we think about those impediments. But we also think about the competitors that are out there that are making significant investments,” said Eriksen.

While the U.S. maintains a competitive edge, Sparger and Eriksen cautioned that America’s competitors also know the benefits of infrastructure investment. They cited as examples, the Chinese investment in Brazil, Brazil’s own investments in modernizing its roadways and ports, and the Ukraine’s efforts to upgrade its infrastructure. Many of these competitors have the advantage of being able to produce commodities more cheaply than the U.S., and being able to move them relatively cheaper has narrowed the gap between their competitiveness and that of the U.S.

Eriksen acknowledged there are challenges ahead, but sounded an optimistic note for the St. Louis region.

“I think the other side of things would be looking at what’s going on for St. Louis with the Ag Coast of America. There are some great opportunities,” Eriksen said. “One, you’re going to have the lower Mississippi being dredged to 50 feet. That’s going to assure reliability from Baton Rouge all the way past New Orleans, past Plaquemines Port Harbor out past Myrtle Grove into the Gulf of Mexico and to the world.”

He also mentioned a new grain export elevator that is filing a permit to be built near the mouth of the Mississippi River, which will create a need for more volume to move through the region. Several of the export elevators have already made improvements to handle more volume and greater throughput capabilities to load vessels faster to get them into the market. “You just reduce that unit cost all the more to get into the world and be more competitive there,” Eriksen said.

He also called attention to the Plaquemines Port Harbor, which recently signed a letter of intent with APM Terminals, a very large global terminal company, to run a significant container terminal at the Plaquemines Parish Port.  It’s a signal there’ll be more containers coming in, and supports the container-on-vessel program American Patriot Holdings has been talking about launching [with service to the Midwest].”

Sparger said the report looks at the projects contained in the State Freight Plans submitted by all 50 states and did a benefit cost analysis. “If all those investments were implemented, it would generate benefits of $40.2 billion over a five-year period versus $18.9 billion in estimated costs. So that’s more than a two-to-one benefit-cost ratio for investment in our highway infrastructure system.  We’d like this report to be the starting point for state and regional and local planners to start having conversations and using the tools we developed to do their own planning and prioritizing for infrastructure, while taking into account the needs of agricultural freight.”

FreightWeekSTL 2021 continues online through May 28 and features a variety of sessions with industry experts and leaders in freight, logistics and transportation. The week-long event is being delivered by St. Louis Regional Freightway, The Waterways Journal and Bi-State Development. To learn more about FreightWeekSTL 2021, visit www.freightweekstl.com.

The St. Louis Regional Freightway is a Bi-State Development enterprise formed to create a regional freight district and comprehensive authority for freight operations and opportunities within eight counties in Illinois and Missouri, which comprise the St. Louis metropolitan area. Public sector and private industry businesses are collaborating with the St. Louis Regional Freightway to establish the bi-state region as one of the premier multimodal freight hubs and distribution centers in the United States through marketing, public advocacy, and freight and infrastructure development. To learn more, visit thefreightway.com.