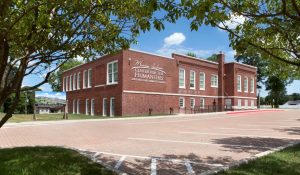 The future of a major landmark in which Lewis and Clark Community College has heavily invested will be the subject of community forums to gather feedback.

The Mannie Jackson Center for the Humanities building at 1210 N. Main St. in Edwardsville will be the topic during talks that begin June 16.

The forums will be moderated by LCCC President Ken Trzaska.

“Lewis and Clark recognizes the historical significance and the value of this newly remodeled facility to the entire region,” Trzaska said. “Our goal is to gather community input on options for this facility for future use. We look forward to listening to our community members and embracing those ideas about the future of this symbolic and historic location and how it might serve as a way for the college and perhaps other community partners to enhance our region.”

The building was donated to the college by Edwardsville native, entrepreneur and influential African American business leader Mannie Jackson, to house the former Mannie Jackson Center for the Humanities Foundation. The college broke ground on the site of the historic Lincoln School in 2014, and the newly-renovated building opened in December 2015.

While it has been the center of a number of conferences and events and the subject of fundraising appearances by internationally known speakers, the building itself has largely been idle for many months. At one time, proponents advocated the potential of a hotel, conference center and more in the block around the Jackson center, but those plans were largely reliant on state financing.

A total of six forums are planned  – three in-person and three virtual:

Anyone who has questions or would like to submit thoughts and ideas but cannot make it to a forum can contact Executive Secretary Sue Keener in the LCCC President’s Office at (618) 468-2001 or skeener@lc.edu.