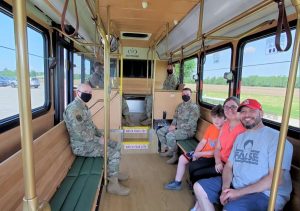 In advance of Memorial Day, the St. Clair County Transit District has debuted its new SCCTD Trolley at Scott Air Force Base. Designed to honor local servicemen and women, the SCCTD Trolley will replace the service vehicles on both the 21 and 21X Shuttle Routes currently offered at SAFB. The cost to ride is $1.

The SCCTD Trolley is a 29.5-foot Gillig bus that has been retrofitted as a cable car classic.

The trolley’s exterior features silhouettes of aircraft that have been stationed and flown at the base since its inception in 1917. 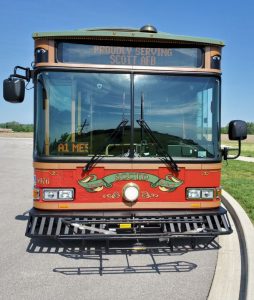 The interior boasts a predominately placed Soldier Memorial plaque that will honor the heroic life of a different fallen servicemember every quarter. 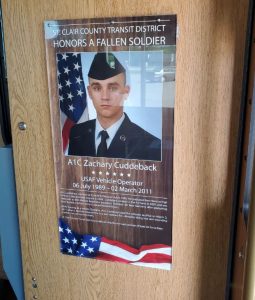 he first featured memorial is of Airman 1st Class Zachary Cuddeback, a USAF vehicle operator. He was born at SAFB on July 6, 1989, and graduated from Monroe High School in Stanardsville, Va., in 2008. Cuddeback enlisted in the Air Force in 2009, and was stationed at 86th Vehicle Readiness Squadron, Ramstein Air Base Germany after graduating from Technical School at Fort Leonard Wood Missouri.

Cuddeback paid the ultimate sacrifice on March 2, 2011, when a terrorist boarded his bus that was transporting deploying security forces from the Frankfurt Airport to Ramstein Airforce Base Germany.

“Scott Air Force Base has been part of the fabric of our community for over 100 years,” commented Herb Simmons, chair of St. Clair County Transit District’s Board of Trustees. “The SCCTD Trolley is our way of paying tribute to each serviceman and woman for their dedication and daily sacrifices to our great nation. We thank you and hope you enjoy transit trips aboard the new trolley.”