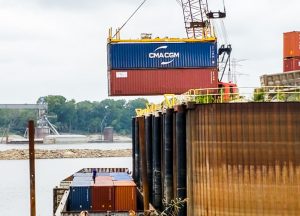 FreightWeekSTL returned for the fourth consecutive year with a virtual panel discussion on May 24 highlighting the global connectivity of the St. Louis region’s rail and inland waterway system and the continuing multimodal infrastructure investment that supports that connectivity.

A highlight of the opening day session included an update on the latest container-on-barge advancements in the bi-state St. Louis region and the innovation that has resulted in the debut of a new barge specifically designed to transport containerized cargo with efficiencies not yet seen on the inland waterways.

Investments being made on the inland waterways for container ports was the trigger for Arcosa Marine Products, Inc. to invest this past yea 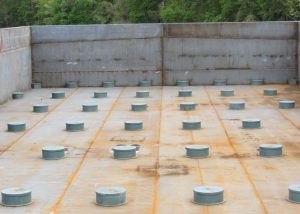 r in building two specially designed barges to help promote more container movement on the rivers. Arcosa Marine Products’ Executive Vice President Neal Langdon said they looked at the normal river tows typically made up of 200-foot-long and 35-foot-wide hopper barges. They then designed a barge that is 200-foot long by 70-foot wide, so it would take the same amount of space as two barges in a tow of 15 to 30 or even 40 barges.

The unique design allows them to get more containers in that same space with the single 200 by 70-foot barge than could be accommodated on two 200 by 35-foot barges.

“We were excited to try to design and promote something new on the river,” Langdon said. “Our new, specially designed barge can carry 40 more 40-foot containers in that same space. That makes it a lot more efficient to move more containers in the same space in barge tows.”

With one barge completed and the second due any day, these new vessels could soon be leveraged in the St. Louis region, which is already ranked as the most efficient inland port system in the nation because of its geographic advantage on the Mississippi River and the cost effectiveness of the rail barge connectivity along the river.

“Barge to rail modal flexibility is significant in a number of ways for the St. Louis region’s manufacturing and logistics industries,” said Ron Tindall, president of the Terminal Railroad Association of St. Louis. “First and foremost, it provides shippers with options in order to find the most efficient and cost-effective means of getting their products to their eventual destination. Having both a land and water transportation option gives shippers the flexibility to make those decisions that are best for them and makes St. Louis an attractive place to do business.” 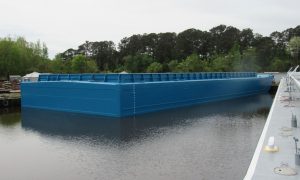 Container-on-Barge (COB) service that launched at America’s Central Port in 2020 is providing even more flexibility for shippers looking to route freight through the St. Louis region.  The COB service currently is bi-weekly and mostly returning empty containers to the gulf, but the goal is to ultimately be shipping the containers full with any variety of products that are suited to container shipping, and the list is endless. Dennis Wilmsmeyer, Executive Director of America’s Central Port (ACP), expressed interest in exploring the additional advantages that could result from Arcosa’s new barge being integrated with the COB service SCF Marine is operating at ACP.

Tindall commented on the region’s designation as the “Ag Coast of America,” based on a section of its port system having the highest capacity along the inland waterways system in the nation to transport agricultural and fertilizer products. He noted that he sees the agricultural industry as a growth opportunity for the St. Louis rail and barge industries. Tindall stated that much of the agricultural business is driven by price in certain places around the globe, and the optionality that exists in the Ag Coast of America enables shippers to maximize their profits.

That optionality exists because of continued infrastructure investment in the region, something that is extremely important to ensure the freight network can accommodate future anticipated growth. Tindall warned that the region could not afford to wait until its infrastructure failed, citing the Merchants Bridge as an example. Even though the original structure still has a couple of decades of useful life remaining, TRRA is proactively replacing it now to avoid significant outages later.

“Keeping infrastructure in a ‘state of good repair’ as we say in the rail industry, is tantamount to an increase in capacity. By reducing the outage time required to maintain aging infrastructure, you can eliminate up to 15 hours a week where rail traffic is at a standstill and instead allow traffic to keep moving. If you look at the course of the year, that’s a tremendous capacity improvement,” said Tindall.

Wilmsmeyer provided an overview of other infrastructure improvements underway at three ports in the region, which jointly received a U.S. Department of Transportation BUILD grant in 2020.

“The St. Louis region received $25 million dollars for upgrades and making improvements to the river harbor and terminal facilities, in order to increase efficiency,” said Wilmsmeyer. “Most of that is going to be rail track investment, putting more rail track on the ground, allowing more opportunities to bring in unit trains and to unload those on a quicker basis.” He added future additions such as new cranes and a tilter for loading product are also planned.

“What really played well here was two sides of the river, two states and three separate counties, and three port districts coming together to make this grant application work,” Wilmsmeyer said. “That’s vital to the Maritime Administration. They’re looking for a lot of collaboration.”

The three panelists agreed the continued focus on increasing efficiency and capacity in the St. Louis region is creating an environment that is attractive to freight forwarders, site selectors and the manufacturing and logistics industry, all of whom want to reduce shipping time and shipping costs. It is particularly appealing to the agriculture industry, which Tindall said is generally not as time sensitive as some other products might be.

“They want to make sure they’re putting a company in a location where there’s certainty. And the great thing about St. Louis is we have four navigable rivers, six class I rail roads and the incredible interstate highway system; all in the heart of the country,” said Wilmsmeyer. “And that’s a big piece of what people are looking for, especially manufacturers, to get raw materials in and finished product out. It’s that certainty.”

Looking ahead, Langdon said his company is looking at ways to be more innovative on the river from the barge and tugboat standpoint. He said Arcosa is investing in technology to further streamline operations and facilitate communications with rail providers and ports so they know what is coming up and down the river and when it is going to get to the ports, so the ports can be more active and more efficient, helping everything flow smoother.

“The St. Louis region has the geographic advantages of being located in the center of the U.S., the most strategic location on the Mississippi River and at the crossroads of the Class I railroads. But that doesn’t always guarantee a supply chain or logistics network will continue to be successful. The secret to success is what we heard today,” said Mary Lamie, Executive Vice President of Multi Modal Enterprises at Bi-State Development. “Someone needs to invest in the infrastructure like the Merchants Bridge or the improvements that include the Build Grant for three ports in two states. Someone needs to take risks. Someone needs to try new routes and try new ways of transporting freight, and a barge designed to specifically carry containerized cargo does just that.”

FreightWeekSTL 2021 continues virtually through May 28 and will feature a variety of sessions with industry experts and leaders in freight, logistics and transportation. The week-long event is being delivered by St. Louis Regional Freightway, The Waterways Journal and Bi-State Development. To learn more about FreightWeek STL 2021, visit www.freightweekstl.com.