A birthday party held recently in suburban Los Angeles had strong connections to the history of Alton Memorial Hospital.

Minola (Lueking) Jackson turned 100 years old on April 16, with a party including friends, relatives and city officials from Lakewood, Calif.

The centenarian, a Wood River native, was able to look back at a long, happy life – with one of the key chapters being her time as a student at the Alton Memorial Hospital School of Nursing. She was among the first students of the school, which opened in 1938 and existed until 1973. Minola was part of the third graduating class in 1942 and could be the oldest living graduate. 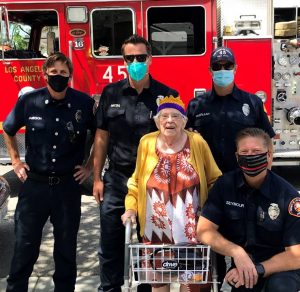 “Nursing school was a great time for me,” Minola said in a phone interview. “I have such good memories of everything. I remember we had to go to chapel every morning since it was a Methodist hospital, then we ate breakfast and were on duty by 7 a.m.” 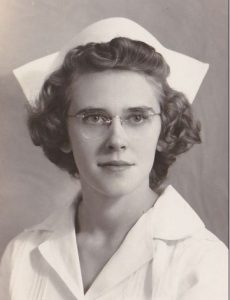 But her best memory might have been one of the patients at AMH named William Jackson. The couple eventually married and had five children. Minola now has 12 grandchildren, 22 great grandchildren and two great-great-grandchildren, “and more on the way,” she says proudly.

William Jackson, who graduated from Shurtleff College in Alton, was an aerospace engineer and worked in Baltimore, where the couple married before the family moved to California. Minola, meanwhile, worked at AMH as well as the old Wood River Township Hospital and South Bay Hospital in Redondo Beach, Calif. Then she worked as a volunteer in area hospitals for almost 20 years after her retirement in 1982.

But her time at the AMH School of Nursing set the tone for everything, and of course Jackson was very familiar with Miss Eunice Smith.

“We saw her out in the flower beds every morning,” she said. “Miss Eunice liked to keep everything looking beautiful. And she was very good to the nursing students. She furnished our uniforms and took care of us.”

Minola also remembers each day walking up and down the 104 steps that connected the hospital to Rock Springs Drive. Perhaps staying in shape from that helped her reach her 100th birthday, though there could be another reason.

“We didn’t have all this junk food when I was young,” she said with a laugh.

Her 100th birthday party at her home was a great success.

“She loved everything about it,” said Minola’s daughter, Barbara Koelkebeck. “We had 100 balloons in the living room, pictures of her life, yard signs and her great grandkids made a big rollout sign for the occasion.  We also had the mayor and a councilman stop by to make a proclamation, plus the Police and Fire departments came by the house.”

AMH sent her some memorabilia, and Minola also received boxes of items from both the Los Angeles Lakers and Dodgers – defending champions of the NBA and Major League Baseball, respectively. Other nursing school alumnae were asked to send cards to Minola – and she received quite a few from them.

“The great thing was we were able to keep quiet about it until the big day,” Barbara said.

The AMH School of Nursing opened March 1, 1938. A graduate nursing staff provided instruction across a range of subjects. Students were rated and needed to meet the maximum requirements of the Illinois State Department of Education and Registration. Tuition at the time for three years (RN degree) totaled $150. A total of 626 nurses, including nine men, graduated from the school in its 35-year history.

Lewis and Clark Community College began its nursing program in the fall of 1971, which phased out the nursing schools at both Alton Memorial and the former St. Joseph’s Hospital in Alton. The LCCC program, however, used practical experiences at the local hospitals. AMH Nursing School alumni from all over the country gather in Alton every two years for a reunion.

PHOTOS: Top, Minola (Lueking) Jackson outside her Lakewood, Calif., home with a crew from the Lakewood Fire Department that stopped by to wish her a happy 100th birthday. Bottom, Minola Lueking in her uniform at the Alton Memorial Hospital School of Nursing in 1942.