$2 billion in outstanding loans to be paid by July 2022

SPRINGFIELD – Gov. JB Pritzker and other Democratic leaders announced Thursday that they have agreed to a plan to repay the money Illinois borrowed from the Federal Reserve during the COVID-19 pandemic before the end of the next fiscal year. 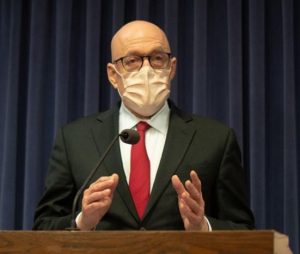 Illinois borrowed $3.2 billion from the Fed through a program that Congress established under the Coronavirus Aid, Relief and Economic Security, or CARES Act to help states that saw dramatic declines in revenue during the peak of the pandemic. Of that, roughly $2 billion remains outstanding.

That money was to be repaid in three installments by December 2023. But in a news release, Pritzker said the state’s recent economic performance and stronger-than-expected revenue growth will allow it to pay off the loan early, saving the state about $100 million in interest charges.

“Repaying the federal government is an important step in our efforts to ensure the state remains on sound fiscal footing,” Pritzker said in a statement released Thursday afternoon. “The General Assembly has been a critical partner in utilizing the federal dollars to help the most vulnerable get through the pandemic. I also credit the Comptroller in strategically managing cash flow in these trying times.”

But even without the debt repayment cost, Illinois faces a number of significant fiscal challenges over the next year.

During a news conference earlier in the day, House Majority Leader Greg Harris, D-Chicago, said the proposed budget as it stands now is about $1.3 billion out of balance and that lawmakers are faced with a choice of spending cuts, revenue enhancements or a combination of both in order to get through the year.

Last week, the Governor’s Office of Management and Budget revised its revenue estimates for the current fiscal year upwards by nearly $1.5 billion and by $842 million for the upcoming fiscal year.

Pritzker attributed that improved performance to state programs during the pandemic that targeted sectors of the economy such as small businesses and child care providers, as well as effective cash management by Comptroller Susana Mendoza.

The statement from the governor’s office noted that final income tax payments received earlier this week, along with stronger year-to-date receipts in the state’s main revenue sources – individual and corporate income taxes and sales taxes – will allow the remainder of the repayment to occur beginning in the next several months.

Earlier, officials had hoped to use a portion of the $8.1 billion in fiscal relief Illinois will receive through the recently-passed American Rescue Plan to pay off the loans, but the Treasury Department has issued interim rules that prohibit the use of those funds to pay off state debt.

“So we’ve been working very hard with the governor and the Senate to devise a plan to make our full repayments using state resources,” Harris said. “So I think that’s very important that we’re meeting all of our obligations, and we’re going to get that done and we’re going to figure out then how to balance our operating budgets as well.”

House Speaker Emanuel “Chris” Welch, D-Hillside, said in the statement that lawmakers would continue to work with the governor’s office to establish a “targeted spending plan” for the federal relief funds to address issues such as affordable housing, community-based mental health and substance abuse services and upgrades to hospitals serving areas disproportionately impacted by the pandemic.

Senate President Don Harmon, D-Oak Park, called the federal loans “a lifeline to keep our state and our economy afloat” during the pandemic.

“That our economy has rebounded so strongly that we can now pay it off early is a testament to the resilience of the people and businesses of the great state of Illinois,” he said in the statement.