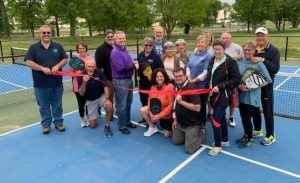 Petty said she had met the originator of the game at an Illinois State teachers’ convention and they brought the game back to Edwardsville High School P.E. classes more than 40 years ago.  But about five years ago a Maryville resident, Bev McCormack, came to a Parks & Rec Committee meeting and proposed Maryville build a court or two in one of our Parks.  With that, the Committee obtained a grant for a net and paddles and had a court lined off in a village cul-de-sac.

For two years, committee members Bob Hunter and Sharon Petty would literally “hold court” a couple days a week over the summer and offer the opportunity to learn the game.  Approximately 30-35 people over the course of that time learned the game and many began playing in Edwardsville, Glen Carbon, and Troy.

A grant was used to help finance the courts.

Pickleball has become an extremely popular sport for both adults and youngsters. It is a combination of tennis, badminton and ping pong.

The courts are located on the east side of Drost Park, just off the MCT School House Trail. You can access them during daylight hours from East Main and Parkview Drive entrance to Drost Park.