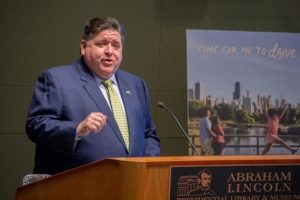 The multimedia campaign, featured around the theme “Time for Me to Drive,” showcases various destinations in all parts of the state and aims to reflect Illinois as a top destination for road trips.

According to a news release, the campaign reflects increasing consumer trends to take shorter trips by car to destinations closer to home following the pandemic. The campaign is the first to be released by the state since the outset of the COVID-19 pandemic last year.

“More and more travelers are ready to get back out there. Recent surveys show that half of Americans plan to travel this summer, and half of them intend to drive,” Pritzker said Wednesday at the Abraham Lincoln Presidential Library in Springfield. “So, whether you want to ease your way back into travel or are raring to go, taking the great American road trip is a great way to enjoy yourself and to stay safe.”

Pritzker said the new campaign introduces tourists to “an Illinois they may not have seen before,” including destinations such as state parks, the Shawnee National Forest and the Garden of the Gods.

The campaign also promotes the cities of Chicago, Springfield and Galena as potential road trip destinations.

Sylvia Garcia, acting director of the state’s Department of Commerce and Economic Opportunity, said prior to the COVID-19 pandemic, Illinois saw over 120 million visitors annually who collectively spent more than $40 billion in the state.

Garcia said those numbers were “cut in half” as a result of the pandemic last year.

“(The) Time for Me to Drive campaign is not only a milestone in bringing tourism back for this summer, it’s also part of our ongoing work towards a strong recovery for the tourism industry over the long term,” Garcia said.

Michael Jacobson, president and CEO of the Illinois Hotel and Lodging Association, said promoting tourism in the state “puts people back to work” and will be important to the state’s economic recovery following the pandemic.

“Promoting tourism helps our economy by getting visitors to stay in our hotels, to eat in our restaurants, shop in our retail stores, buy fuel in our gas stations, and enjoy our amazing attractions,” he added.

Jacobson said 20,000 hotel workers are still out of work following pandemic-related closures and shutdowns, and that promoting tourism would be key to increasing tax revenue in the state.

Jayne DeLuce, president and CEO of the Illinois Council of Convention and Visitor Bureaus, said the return on investment for destination promotion drives $11 in tax revenue for every promotional dollar spent.

“Beyond creating priceless memories, these road trip experiences create an immediate infusion of cash in the tourism economy, which has been so decimated by the pandemic,” DeLuce said.

PHOTO: Gov. JB Pritzker announces a new state advertising campaign Wednesday at the Abraham Lincoln Presidential Library in Springfield, an effort to get people from surrounding states to take a road trip to the Prairie State. (Capitol News Illinois photo by Jerry Nowicki)