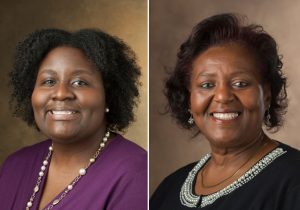 The Southern Illinois University board of trustees, at its regularly scheduled meeting Thursday, approved three equity, diversity and inclusion positions as the SIU System emphasizes its focus on battling systemic racism.

Two positions are on the Edwardsville campus: Jessica Harris, PhD, was officially appointed as the vice chancellor for equity, diversity and inclusion for SIUE. Venessa A. Brown, PhD, was approved as associate athletics director for diversity, equity and inclusion, chief diversity officer for the Department of Intercollegiate Athletics, and special assistant to the chancellor.

Harris is SIUE’s inaugural VCEDI after serving as assistant provost for academic equity and inclusive excellence in the SIUE Office of the Provost in 2020 and serving as the interim assistant provost for the previous two years. An SIUE faculty member since 2011, Harris has served as an associate professor of historical studies in the SIUE College of Arts and Sciences and director of the interdisciplinary Black Studies program.

Harris’ work at SIUE has included a special assignment as a Provost Fellow for Diversity and Inclusion. In this role, she collaborated with faculty colleagues, undergraduate and graduate students, the Honors Program, and the Division of Student Affairs to launch a pilot of Sustained Dialogue, a powerful five-stage social action model encouraging dialogue across differences, as a curricular and co-curricular program. She received the Faculty Humanitarian Award at SIUE’s 2018 Dr. Martin Luther King Jr. Birthday Celebration.

The VCEDI will serve an integral role in two important current initiatives – implementation of the Anti-Racism Task Force 78 recommendations and the Higher Learning Commission Quality Initiative focusing on anti-racism. The VCEDI also will work closely with the SIU System and its new vice president for diversity, as well as the Diversity Advisory Council.

A longtime supporter of Cougar athletics, Brown is the Department of Athletics’ first associate athletics director for equity, diversity and inclusion. She is tasked with moving SIUE Athletics to the forefront on campus and nationally with regard to DEI. She already has led several training sessions with SIUE coaches and athletics staff.

Brown joined the SIUE faculty in 1995 as an assistant professor in the Department of Social Work and became a full professor in 2006. She was most recently the associate chancellor for the Office of Institutional Diversity and Inclusion, and chief diversity officer. She holds a tenured faculty appointment as professor in the Department of Social Work. She also has served as associate provost in the Office of the Provost and Academic Affairs, and executive director of the SIUE East Saint Louis Center.

Photo from left: SIUE’s Jessica Harris, vice chancellor for equity, diversity and inclusion; Venessa A. Brown, associate athletics director for diversity, equity and inclusion, chief diversity officer for the Department of Intercollegiate Athletics, and special assistant to the chancellor.