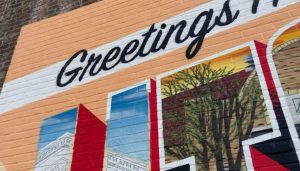 A closeup of the mural now being painted on a building at 423 N. State St. in Litchfield. 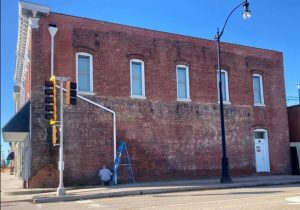 A Greetings from Litchfield mural, part of a nationwide series, is underway and should be completed weather permitting by May 1.

The mural is located on a building at 423 N State St. Litchfield (just off Illinois Route 16). Work began April 21 and should be done in time for the Litchfield Chamber of Commerce’s planned Art in the Park on May 1.

Victor Ving and Lisa Beggs of the Greetings Tour say the tour is looking to create an “iconic postcard mural” in all 50 states.  With the support of the City of Litchfield, and the Litchfield Tourism Office this will be their 48th mural and their second piece in the state of Illinois (after Chicago.)  Some of the imagery of the artwork will include: the Historic Litchfield Carnegie Building, the famous Route 66 Ariston Café, and Lake Lou Yaeger Recreational Area.

“We are thrilled to be a part of this national series, and invite everyone to visit Litchfield, Ill., and enjoy this mural installation,” Litchfield Tourism Coordinator Sarah Waggoner said.

Mural artist Ving and photographer Beggs, are a couple on a cross-country road trip in their RV creating interactive murals that will become future landmarks. The ‘Greetings Tour’ seeks to create public art that will capture the pride of local residents for their hometowns and spark the interest of visitors and tourists. The two artists have been traveling select cities throughout the United States since April 2015 painting modern murals with spray paint inspired by vintage large-letter postcards.  At each stop, Beggs’ photography and recommendations from locals will serve as reference for letters in the mural given back to the cities. Local artists and businesses will be invited to collaborate with their ideas.

Victor Ving is a former NYC graffiti artist who now utilizes his aerosol art experience to create public murals for local communities. He is one of the founder/co-owner of Mural Art & Consulting (https://muralartist.co) and Graffiti Arts (https://graffiti-artist.net) creative agencies.

Photographer Lisa Beggs was born and raised in Ohio. Upon graduating from Ohio University for Commercial Photography and Dance, she moved to New York City where she began shooting. Her  portfolio can be found on her website (http://lisabeggs.com)

The images are from Facebook. For a video of the mural, go to the Visit Litchfield Illinois page.