Circuit Judge Christopher Threlkeld of Edwardsville has announced he will be a Republican candidate for resident circuit judge in the 2022 election. 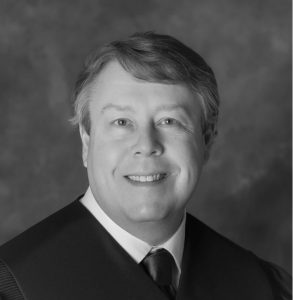 Threlkeld will run to fill the vacancy created when Circuit Judge David Dugan was confirmed to serve in the federal district court.

Threlkeld (shown) has been a circuit judge since February 2020, when he was first appointed by Supreme Court Justice Lloyd A. Karmeier (retired) and was reappointed in December 2020. Judge Threlkeld serves in the civil division and presides over Law division cases.  He has also served as the presiding judge over arbitration and other civil dockets. While he was the presiding judge over arbitration, he established remote arbitration hearings during the COVID-19 pandemic.

“Since my appointment to the Circuit Bench, I have worked diligently to provide a fair and respectful courtroom to all who have appeared before me,” he said in a statement. “The COVID-19 pandemic dramatically limited in person appearances in the courthouse. By embracing technology such as Zoom I was able to maintain a full docket and allow parties and attorneys to appear remotely so that their cases could progress seamlessly.  Serving as a Circuit Judge is a tremendous honor, and I look forward to the privilege of continuing to serve the people of Madison County.”

Threlkeld has been licensed to practice law since 2000. He is a graduate of St. Louis University School of Law.He earned his undergraduate degree from The Citadel: The Military College of South Carolina and earned a Master of Business Administration degree from SIUE.

Threlkeld practiced law in Edwardsville at Lucco, Brown, Threlkeld & Dawson for 20 years before being appointed to the circuit court and has extensive trial experience. He was employed as a deputy treasurer for then Madison County Treasurer, John Shimkus, prior to practicing law.

Threlkeld is the son of Dr. Jananne Threlkeld and the late William Threlkeld and is a graduate of Edwardsville High School. He has been married to his wife, Denise, for almost 30 years and they are the parents of two, adult sons and a daughter-in-law. Judge Threlkeld is a member of First Baptist Church, Maryville, the Edwardsville Gun Club, served in the Army National Guard, and was past president of the Madison County Bar Association and the Edwardsville Optimist Club.