“Drugs are a scourge on our neighborhoods and communities, and I’m proud to partner with the Sheriff and Coroner’s offices to host this event and help keep unused prescriptions out of the hands of those who would sell, misuse, or abuse them,” said Haine. 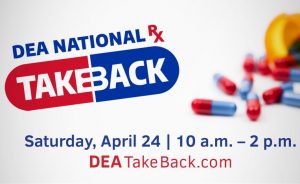 The event, which is part of the Drug Enforcement Agency’s National Prescription Take Back Day, provides a nationwide opportunity for Americans to work together to help prevent drug addiction and overdose deaths. The Madison County event will be held at the Administration building from 10 a.m. to 2 p.m. on Saturday, April 24. The county’s Emergency Management Agency mobile command unit vehicle will also be present for the take-back event.

“The drug take-back program has been an integral part on our continued battle against this drug epidemic that has swept over this nation and our county,” said Nonn. “It never ceases to amaze me on the amount of drugs we take off the street every time we have been involved in these Drug Take Back Days.”

“The Sheriff’s Office is committed to this cause because oftentimes old narcotics can fall into the hands of children or someone else who could succumb to temptation of narcotics experimentation,” said Lakin. “We will continued to work with the federal authorities and the State’s Attorney’s Office during this endeavor. We highly encourage participation in the DEA drug take-back program.”