The Cahokia Mounds and Mississippian Culture National Historic Park would include mounds in Madison, St. Clair, and Monroe counties, as well as Sugarloaf Mound in St. Louis. The park would be jointly managed between the park service and local stakeholders. 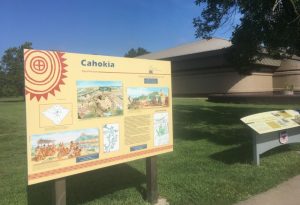 “Southern Illinois is home to one of American history’s greatest civilizations,” said Bost. “Cahokia was the largest city and center of the ancient Mississippian people. Cahokia and the associated mounds sites in the region are a critical part of our history and incorporating them into our national park system will help us preserve this history for generations to come. I appreciate the dedication of HeartLands Conservancy and all of our state and local leaders who have been working tirelessly to make this effort a reality.”

Cory Jobe, president and CEO of the Great Rivers & Routes Tourism Bureau, which touts the landmark, praised the actions.

“Cahokia Mounds, located just outside of Collinsville, has been an awe-inspiring destination for cultural and history buffs over the decades. With its status as a UNESCO World Heritage Site and Illinois designation as a state historic site, it is only fitting that it be granted National Park status,” Jobe said in a statement.

“The Great Rivers & Routes Tourism Bureau stands in support of U.S. Senator Dick Durbin’s bill reintroducing National Park status for Cahokia Mounds. We also back U.S. Congressman Mike Bost’s bill to make the site a National Park.  Adding this designation is another jewel in the crown of Cahokia Mounds which tells ancient history of our region long before European settlers made it their home,” the bureau statement said.

One thousand years ago, Cahokia, “America’s First City,” was built by the Mississippians in Southern Illinois. The region was home to 10,000-20,000 people at its peak around 1200 A.D. Today, the Cahokia Mounds is a 2,200-acre state historic site made up of more than 70 mounds. Cahokia Mounds is a UNESCO World Heritage Site, a National Historic Landmark, and is on the National Register of Historic Places.

Currently, the site is administered by the Illinois Department of Natural Resources. In 2018, the department announced support for national park status, and in May of 2019, the Illinois House of Representatives backed a resolution supporting this status as well.

The companion bills are nearly identical to the bills from 2019 and seek to elevate Cahokia Mounds State Historic Site, a UNESCO World Heritage Site, and several surrounding mound sites as a unit of the National Park system using a partnership model. The bills further seek to provide access to Indigenous people for spiritual practices and expressions.

“We would like to thank the Senator and Representatives for their leadership and persistence in ensuring Cahokia Mounds and the Mississippian Culture receive the national recognition this sacred landscape deserves. We would also like to thank the support and guidance over the last 10 years from many of the First Nations who have a connection to the Mounds, as well as the thousands of individuals, organizations, and communities who supported this effort,” HeartLands said in a statement.

PHOTOS: Bost during a presentation in 2019 talking about  the effort to get Cahokia Mounds, above, designated as a national park.