SPRINGFIELD – Illinois will now provide Medicaid benefits to eligible mothers for up to 12 months postpartum, a major extension from the previous 60-day limit.

Gov. JB Pritzker made the announcement Tuesday after a waiver submitted in 2019 by the state to the federal Centers for Medicare and Medicaid Services was recently approved. 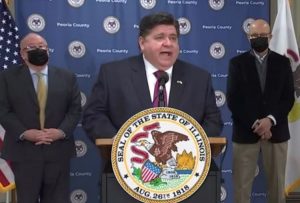 “Every mother in Illinois deserves access to quality health care following the birth of a child, regardless of their income level,” Pritzker said in a release. “I’m proud to announce Illinois is now the first state in the nation to offer eligible mothers 12 months of postpartum care coverage through Medicaid.”

According to the release, the measure was pursued specifically to address the significant health disparities in maternal mortality and morbidity between Black women and their white peer groups. The Illinois Department of Public Health developed a report in 2018 that found Black women were six times more likely to die of a pregnancy related condition, with a lack of care continuity and coordination contributing to over 90 percent of preventable pregnancy-related deaths in that demographic.

As a result, IDPH recommended the Medicaid extension, which was passed by the General Assembly and signed into law by Pritzker (shown) in 2019 before the state formally applied to the federal government.

Women with incomes up to 208 percent of the federal poverty level set by the federal Department of Health and Human Services will have continuous Medicaid eligibility 12 months postpartum.

“It’s a good first step,” state Rep. Mary Flowers, D-Chicago, said in an interview Tuesday. “I was hoping to have it expanded to 5 years because there’s a lot of studies out there that shows just because 12 months passed it doesn’t mean the woman’s body has healed.”

All child-bearing age women should have access to quality health care, Flowers said, and she stressed that a time limit could not be placed on a mother’s recovery from childbirth.

Flowers sponsored legislation in 2019 to create the Task Force on Infant and Maternal Mortality Among African Americans. With assistance from IDPH, whose director serves on the task force, it works to establish best practices to decrease infant and maternal mortality.

The task force was set to release its first report Dec. 1, 2020 and every December annually after that.

However, according to Flowers, the group missed its initial deadline due to the COVID-19 pandemic and gave lawmakers a partial report following the start of the new General Assembly. Flowers said the task force will deliver a full report soon and based on its findings she plans to draft legislation to further expand Medicaid benefits for mothers.

“I want to thank the governor for a good beginning of extending coverage under Medicaid, and I look forward to working with him to extend the program indefinitely,” Flowers said. “Let the doctors decide what’s in the best interest of the woman.”