This is the first time a Navy sailor will serve in the USTRANSCOM senior leadership role.

“First, it’s an honor to preside over the time-honored tradition of recognizing truly the best of the best of our senior enlisted force,” said U.S. Army Gen. Stephen R. Lyons, commander, USTRANSCOM, in his opening remarks. “At the level we serve, you truly cannot get much better than the two men here with me today.”

The virtual ceremony was held in the command’s auditorium.

“It’s a bittersweet moment whenever you farewell someone, especially the likes of Chief Master Sgt. Jason France, who has been the epitome of a leader,” said Lyons. “However, I’m extremely excited for the opportunity to work alongside Fleet Master Chief Donald Myrick, whose reputation among his peers is second to none.”

During the ceremony, France passed the unit guidon to Lyons to signify relinquishment of his duties. Lyons then passed the guidon, and responsibility, to Myrick.

Myrick expressed appreciation for Lyons choosing him to be his senior enlisted leader and for the opportunity granted by the U.S. Navy. He also addressed the previous SELs who served at USTRANSCOM.

“The previous six command senior enlisted leaders epitomized leadership,” said Myrick. “I want to thank you and your families for your dedication to United States Transportation Command, the Department of Defense and our nation.”

The new SEL then turned his attention to USTRANSCOM personnel watching online.

“To the TRANSCOM workforce dispersed throughout the globe, I begin this journey from a place of humility. I intend to travel to your place of work, understand your mission, advocate on your behalf, and communicate the importance of your efforts to the success of the Department of Defense. Team TRANSCOM, I am truly honored to join your ranks. I promise to put forth every ounce of effort within me to strive for success and lead and support our team with a high level of integrity and character.”

France reflected on his time at USTRANSOM and thanked members of the command.

Myrick comes to USTRANSCOM from his previous assignment as the Command Master Chief at the Navy’s Office of Inspector General.

As SEL, Myrick is the principal advisor to the combatant commander and the senior staff on all matters concerning joint force integration, readiness, professional development, and effective utilization of the enlisted corps. He coordinates with the headquarters staff, component commands, and subordinate organizations on the development and implementation of command policy and ensures the strategic focus and synchronized efforts of more than 144,000 military and civilian warfighters providing global air, land, and sea transportation for the Department of Defense.

USTRANSCOM exists as a warfighting combatant command to project and sustain military power at a time and place of the nation’s choosing. Powered by dedicated men and women, TRANSCOM underwrites the lethality of the Joint Force, advances American interests around the globe, and provides our nation’s leaders with strategic flexibility to select from multiple options, while creating multiple dilemmas for our adversaries. 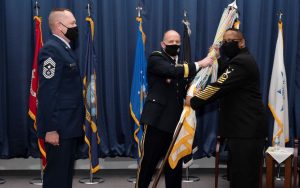